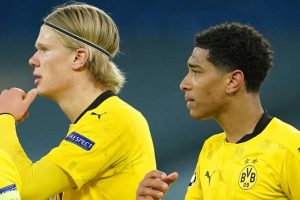 All eyes were on Erling Haaland in Manchester City’s slender Champions League first-leg win over Borussia Dortmund but Jude Bellingham proved to be a player for the present not just the future at the Etihad.

Haaland, football’s hottest property, arrived at the Etihad for what had been billed in some quarters as a potential audition, despite Pep Guardiola’s insistence that a big-money striker was beyond his side this summer.

The hulking Norwegian had his moments, shrugging off Ruben Dias with contemptuous ease only to fire straight at Ederson, but more decisively steering a ball smartly into the path of Marco Reus for a late leveller that proved short-lived.

His pace, link-up play and movement impressed but a player even younger than his 20 years really caught the eye in this compelling first leg, surely providing further food for thought for England boss Gareth Southgate.

Bellingham became only the second-youngest player to start a Champions League quarter-final – behind only Bojan in April 2008 for Barcelona against Schalke – but delivered a performance beyond his tender age of 17 years and 281 days.

The Birmingham academy graduate thrived on the big stage in his box-to-box role, composed on the ball and tenacious off it. He had the first real opportunity of the night when he created space in the area, only for Ederson to push away his left-foot strike.

Alongside clever late runs into the box, his athleticism and physicality was on show when he raced goalwards and nicked a ball off Ederson’s toe before tapping home. It was an equaliser that should have stood, just reward for quick brain and feet, but referee Ovidiu Hategan inexplicably deemed it a foul, brandishing a yellow card as well as chalking off the goal.

“I definitely think I won the ball fairly,” Bellingham later told BT Sport. “It’s a bit frustrating at a time when there are so many TVs and cameras but it’s football; you’ve got to get on with it. Apparently I had my studs up and caught the goalkeeper.”

Phil Foden would restore the advantage Kevin De Bruyne had given City with a last-gasp winner but Dortmund will take what could be a priceless away goal to Germany for the second leg on April 14 and Bellingham played a key role in the move that Reus finished, dropping a shoulder before feeding Haaland with a flick of the outside of his boot.

“His all-around game is so good, he plays like a grown man,” said watching pundit Owen Hargreaves. “He’s already a star and he’s going to be one of the best in a short time.” Bellingham, bearing a bleeding knee “from chasing De Bruyne” engaged in more duels than any other Dortmund team-mate and admitted he relished the challenge of facing one of the world’s best in Europe’s top club competition.

“I’m knackered now,” he said. “They’re brilliant – one of the best teams in the world if not the best. The way they move the ball and go to regain it after they lose it is world-class.

“You give De Bruyne time in the box and time to put in a cross and it’s going to damage us; it did but we’ll move on.

“I think we frustrated them well when they had the ball. At times they found us hard to break down; we used the ball efficiently and it was a brilliant bit of play to put Marco in and a great finish.

“It’s disappointing to concede so late but we’ll use that away goal in the second leg and we’ll see what we can do. We need to create a bit more next week and tale the game to them and I think we’ll do that.” Jamie Carragher and Gary Neville picked their Euro 2020 squads on Monday Night Football but – speaking ahead of the Champions League action – were split on whether Bellingham should make the cut.

Neville omitted Bellingham but Carragher included him in his 23-man selection.

“Bellingham’s playing for Borussia Dortmund in the Champions League, and I think he’s going to be a star of the future for England.

“He’s one of those in the squad where you’d look at them as not being involved as much, but you’re putting them in the squad for the future. Not to say he’s not good enough, he’s playing in the Champions League and will be involved against Manchester City.”

Would you take Bellingham to the Euros? Select your 23-man squad below and then share your selection on social media…