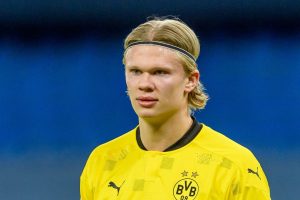 Manchester United and Chelsea have been dealt a blow in their pursuit of Erling Haaland this summer as Borussia Dortmund insist the striker will stay at the German club next season.

The English big hitters and champions-to-be Manchester City are all keen on securing a move for the Norwegian talisman who has a £70m release clause in his contract that will be activated in the summer of 2022.

But Dortmund could be persuaded to part ways with their prized asset a year early if a big-money bid arrives at their doorstep.

Haaland has been lined up as a potential replacement for Sergio Aguero who will leave the Etihad at the end of the season.

Ole Gunnar Solskjaer has also hinted that United will attempt to rival City for his signature as he eyes a reunion with his compatriot.

Chelsea have also entered the frame, while Haaland's agent Mino Raiola has already held talks with Real Madrid and Barcelona.

But his suitors have been hit with a setback in their chase for him as Dortmund claim he will stay put for next term.

BVB chief executive officer Hans-Joachim Watzke said: "I've known Mino Raiola for a long time and get along well with him. It's no problem for us. Erling Haaland will remain a Borussia Dortmund player next year."

He told Sport1 broadcaster's Doppelpass program: "I understand that Erling Haaland will play for Borussia Dortmund in the new season.

"Erling totally agrees. I see him every day and I can say that he completely identifies with the club."

Raiola discussed his potential switch to the Real over the weekend, saying: I don’t know if they can afford him, because I haven’t studied their books.

“But I think they can. I think they all can. The question is different: Can Madrid afford not to buy Haaland? And Barca?

“I think that if a good opportunity comes up and everyone would be happy, we’ll put it on the table.”