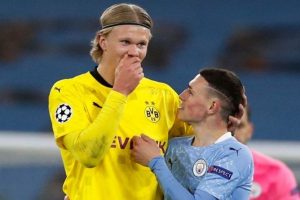 Erling Haaland and Phil Foden shared a moment after Manchester City’s win over Borussia Dortmund that had fans convinced the striker could be on his way to the Etihad. City won 2-1 as the rivals met in the first leg of their Champions League quarter-final, with Dortmund striker Haaland expected to be a target for Pep Guardiola’s side in the summer transfer window.

Haaland was unable to add to his incredible scoring record with Dortmund that has made this summer’s hottest transfer property, with Manchester United, Chelsea, Real Madrid and Barcelona all expected to join City in the race to sign the 20-year-old.

However, the striker did set up Marco Reus’ equaliser – which could yet prove crucial in the tie with Dortmund taking an away goal into next week’s second leg.

Reus’ 84th-minute strike cancelled out Kevin de Bruyne’s first-half goal, but Phil Foden scored in the final minute of normal time to give City the advantage.

And afterwards, Haaland could be seen covering his mouth as he chatted to Foden, with both players smiling before sharing an embrace. 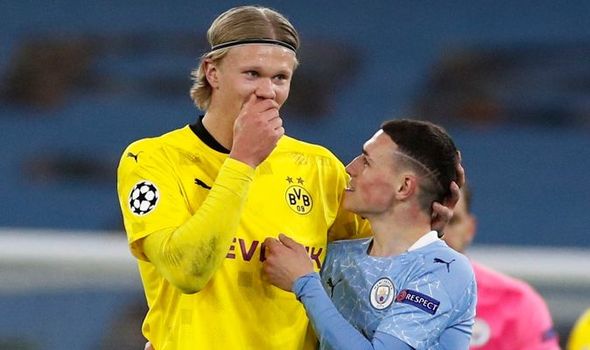 It is not known what the two 20-year-olds were saying to each other – but some City fans on Twitter were happy to take it as a sign that Haaland could be on his way to the Etihad this summer to replace departing club legend Sergio Aguero.

“Haaland to ManCity confirmed. Here we go!” joked one fan on Twitter.

A City fan account tweeted a picture of the two players hugging, along with the caption: “Foden and Haaland all over each other at the final whistle. The future of Manchester City.”

Haaland’s dad Alf-Inge played for City, and another fan was perhaps making reference to that fact when he tweeted: “Omg Foden is bringing Haaland home.” 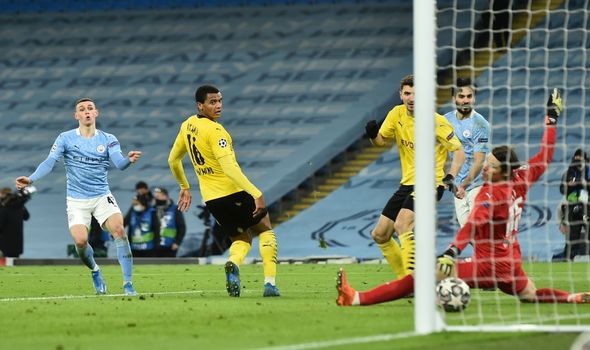 Another supporter predicted City’s potential attack for next season, tweeting: “City be some team next year with KDB, Foden, Sterling and Haaland.”

And another fan tweeted in a similar vein, posting: “We’re genuinely going to have a front three of Torres, Haaland and Jesus all in their primes in a few years with Foden in behind, we’re going to be relentless.”

Plenty of fans also pointed out that Foden outshone Haaland on the night, with one captioning a picture of the two of them: “Erling Braut Haaland another victim of the Sir Philip Foden test.”

Of course, while Haaland didn’t find the net on the night, his record of 49 strikes in 51 games for Dortmund stands as testament to his goalscoring ability.

But it remains to be seen which club will be benefitting from his prolific finishing next season.