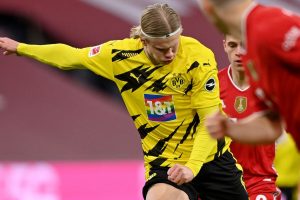 Erling Haaland scored twice in the opening eight minutes against Bayern Munich on Saturday before Borussia Dortmund were put to the sword by Robert Lewandowski.

Hansi Flick’s side were looking to go back to the summit with a win against their rivals in Der Klassiker, and they were met by a formidable foe in Haaland.

Dortmund had won only one once in the last eight league meetings between the clubs, and got off to a perfect start as their prolific forward scored after just 74 seconds.

It didn’t take the Norwegian long to double his tally, netting again after eight minutes as Thorgan Hazard impressed in the absence of the injured Jadon Sancho.

One fan said on Twitter: “It’s safe to say Bayern will be cheering the loudest when Haaland leaves.”

A United supporter added: “We need to go all out & get this guy regardless of the cost!!”

With a fourth adding: “Haaland isn't human… regardless of his shot taking a little deflection but what a strike, the man is unreal!”

However, the lead was wiped out before half-time, with Robert Lewandowski tapping home from close range before making no mistake from the spot.

Haaland was full of praise for the veteran before the match, and noted his positioning as a particular strength in his goalscoring success.

He said: "Primarily, he is extremely good technically and in the build-up phase.

"It is a fantastic team. I watch them, and he is fantastic in some of the build-up play.

"They always know where he is, and he always manages to be there and finish the attacks. That is impressive."

READ MORE: Elliott banned for one year after investigation into dead horse photo