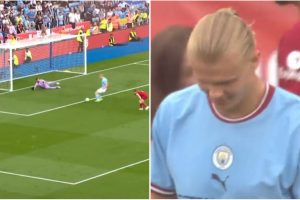 Haaland unveiled as Man City player after switch from Dortmund

Manchester City star Erling Haaland left fans shocked for all the wrong reasons on Saturday, missing a point-blank opportunity in the dying embers of the Sky Blues’ Community Shield defeat against Liverpool. The Norwegian, who arrived from Borussia Dortmund this summer in a blockbuster £51million deal, struggled to make his mark on Saturday and the late howler will have left an even worse taste in his mouth.

Having a central striker is still something of a novelty for City, having won the Premier League last term without a senior frontman in their squad. And that showed on Saturday, when Liverpool ran out 3-1 winners at the King Power Stadium to win the Community Shield.

Haaland, who arrived in Manchester under the weight of great expectations due to an exceptional goal-scoring record at club and international level, made a series of runs in behind that were ignored by his City team-mates in the first half. When found he showed strength and determination, going close on a couple of occasions, but his frustrating afternoon was capped off in second-half stoppage time.

Phil Foden’s low strike forced Adrian into a low save which was parried straight into Haaland’s path. But from inside the six-yard box, he spooned it onto the top of the crossbar prompting a huge reaction from inside the stadium. 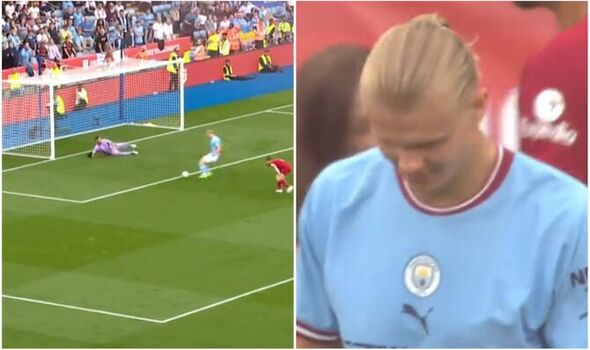 Naturally, City fans were left with heads in hands after seeing their new star striker fail to get off the mark, while the miss only added to the party spirit in the Liverpool end as Jurgen Klopp’s side struck the first blow in a battle between two English football heavyweights.

Haaland managed a wry smile after the miss which, it goes without saying, is out of character for a player who bagged 29 goals in 30 games for BVB last campaign. The Sky Blues made a big statement by beating the likes of Real Madrid to his signature, and Liverpool responded by signing a frontman of their own in Darwin Nunez.