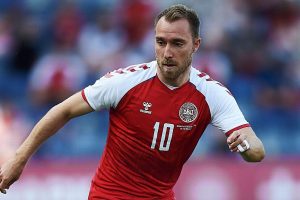 Denmark player Christian Eriksen’s condition is still stable since he suffered a cardiac arrest and collapsed during his side’s Euro 2020 opening match against Finland on Saturday.

Teammate Pierre-Emile Hojbjerg also said Eriksen delivered a message via video link from hospital to say that he is doing OK and that Denmark should try to focus on playing their next game, against Belgium on Thursday.

Marcotti: Eriksen’s collapse a reminder of the fragility of life

Eriksen, 29, was taken to hospital in Copenhagen after he collapsed on the pitch in the 43rd minute. He had just played a short pass when he fell face down onto the ground and was given urgent medical attention for around 10 minutes. The midfielder was eventually carried off to a loud ovation, with his teammates walking next to the stretcher.

UEFA announced shortly after that the game had been suspended, before it resumed later on Saturday, resulting in a 1-0 victory for Finland.

Eriksen’s agent said that the player is undergoing detailed examinations.

“We all want to understand what happened to him and he wants to as well. The doctors are doing some detailed examinations, it will take time,” Italian newspaper Gazzetta dello Sport on Monday cited Eriksen’s agent Martin Schoots as saying.

“Christian does not give up. Him and his family want to send everyone their thanks.”

“We spoke this morning [Sunday]. He was joking around and in good spirits, he was doing well,” he added.

Eriksen was playing in his 66th competitive game in the one year since football restarted following a shutdown due to the coronavirus pandemic.

Messages of support have come pouring in from within the game and beyond, and Schoots said they have helped Eriksen on his road to recovery.

“He was happy because he understood how much love he has around him,” Schoots said. “He received messages from all over the world.

“He was particularly struck by those from the world of Inter Milan; not just from his teammates, who he heard from through texts, but also the fans. Half the world has contacted us, everyone is worried. Now he just needs to rest. His wife and parents are with him. But in any case he wants to support his teammates against Belgium.”

Denmark’s other players said they would play their coming games in the Euros in honour of their teammate, who was treated on the pitch before being taken to hospital.

“We’re still in the tournament. Now, we have to try to see if we can win this and do it for Christian and do it for all the fans who sat with us and were just as powerless in the situation as we were,” Denmark’s goalkeeper Kasper Schmeichel told broadcaster DR.

“I have no doubt that this team has the unity, the strength to be able to come together and go out and do something special”, he added.

Schmeichel said he had also visited Eriksen at the hospital: “It was damn nice to see him smile and laugh and be himself and just feel that he is there. It was a great experience and something that has helped me a lot”.

Schmeichel and other players were meeting the press for the first time since the match against Finland, which the Danes lost.

“We all play for Christian. That’s for sure,” Pierre-Emile Hojbjerg told DR.

Hojbjerg added that seeing Eriksen smile gave him ”a form of energy” and that the team will play for the midfielder against Belgium, on Thursday.

Meanwhile, former Bolton Wanderers midfielder Fabrice Muamba said Eriksen’s collapse brought back painful memories of his own cardiac arrest and that the Dane’s toughest challenge in recovering from the incident will be a mental one.

Muamba, who collapsed on the pitch in an FA Cup match in 2012 and was technically dead for 78 minutes, said it took him more than a year to come to terms with the incident, which forced him to retire at the age of 24.

“It’s too early to know about his physical health, but I can share something of the mental battle which, in many ways, is the toughest part of the journey ahead,” Muamba wrote in his column for The Times newspaper.

“My advice is to take a step back and take all the time he needs because it will definitely affect him mentally, and his family.

“That worry plays in your head, whatever the doctors tell you. It’s not easy to get over.”

Muamba said Eriksen’s teammates, who shielded him from the crowd and cameras as he received CPR on the field, would also need support.

“They didn’t know if their friend was going to survive,” Muamba added. “I thought the way the Denmark players surrounded him — to protect him — was amazing to witness.”

Sanjay Sharma of St. George’s University of London, Eriksen’s cardiologist at former club Tottenham Hotspur, said, in quotes reported by Reuters, that the Inter Milan playmaker will have to decide if he wants to resume playing but strict federal laws in Italy might stop him.

“In Italy, the laws are very, very strict, and I understand that it would be against the law for him to now play competitive sport in Italy,” Sharma said.

“Other countries are a little bit more liberal and respect the autonomy of the athlete, so at best he may get a defibrillator put in and be allowed to play in some countries.

“But in most situations like this, it’s a career-ending situation.”

Information from the Associated Press was used in this report.