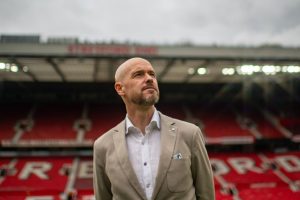 ten Hag: No 'risk' to come to Manchester United

Erik ten Hag is reportedly ‘pushing and pushing’ for Manchester United’s board to sign Barcelona midfielder Frenkie de Jong this summer. De Jong is Ten Hag’s top target and the new manager is continuing to push for his signing.

The former Ajax boss joined United in the off-season following the expiry of interim boss Ralf Rangnick’s contract at Old Trafford. He has been tasked with rebuilding the club’s playing squad, which has seen the exits of Edinson Cavani, Paul Pogba, Jesse Lingard and Nemanja Matic to name but a few.

Arrivals are imperative if United are to bring Champions League football back to the Theatre of Dreams and transfer guru Fabrizio Romano has stated that Ten Hag is ‘pushing’ club chiefs to bring the midfielder in if they are to progress. Romano states that Barcelona received a verbal proposal from United last week in what was a bid to take the Dutchman to Manchester.

It is claimed that a £53million bid was made, with £8m in add-ons on top, but that was instantly rejected by the Catalonian giants. Romano states that Barcelona would require £73m for United to take De Jong off their hands. But with Ten Hag wanting to get off to a good start as United boss, he is pushing the board to complete a deal for the player he coached back in Amsterdam.

De Jong stated he wished to stay in Spain in an interview back in May, casting doubt on the deal. “I prefer to stay with Barcelona,” De Jong told ESPN back in May.

“What I’m saying, there is absolutely nothing of an agreement or anything official. At the moment there is no question of it at all. Not that I know of in any case. Or they must not have told me, but I don’t think so.”

And he added more recently: “You’re always flattered when teams show interest in you as a player, but I am at the biggest club in the world at the moment. I feel fine at Barcelona… so no news.”

United have also been linked with moves for Christian Eriksen and Jurrien Timber among others.