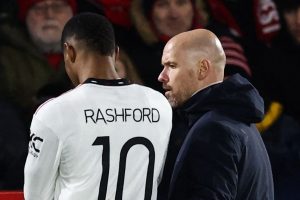 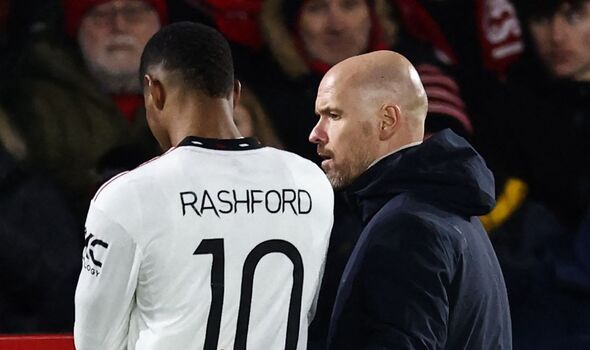 Erik ten Hag has warned his Manchester United side that they must react to opponents changing systems mid-match if they are to become a top team despite their 3-0 Carabao Cup semi-final first leg triumph at Nottingham Forest. The Dutchman has claimed he witnessed disarray amongst his players after Steve Cooper made a cunning tactical tweak in the first half that helped the hosts quickly equalise.

Thankfully for United, Sam Surridge’s cool finish was chalked off for offside following a VAR review.

Bruno Fernandes later added gloss with a brilliantly-taken third just moments from time to ensure United put one foot in the final at Wembley where they could face Newcastle or Southampton providing they take care of business next week at Old Trafford.

But Ten Hag has warned his team that they need to maintain concentration levels in the future after surviving a first-half scare at the City Ground, as he told Sky Sports: “There was one moment that could have changed the game and that is what we have to be aware of.

“We have to improve but overall I think it was a good performance from our team but the first leg is done, one leg to go.”

When asked to elaborate on the moment he mentioned, he added: “Yes, they changed the system and we didn’t read, we didn’t anticipate that.

“I have to say, we still didn’t react to counter-attacks. We knew that before and that can’t happen.

“It’s still a moment where we have to learn and improve as a team. If we want to be top, we can’t be doing that.”

United were totally dominant in the second half and could have added more goals had they been more decisive and clinical in the final third.

When asked what he said to his players at half-time, Ten Hag made it clear he instructed his squad to avoid gifting Forest a way back into the game – something they carried out to perfection.

He added: “Don’t light the fire, we almost let them come into the game.

“We can’t let an opponent come back into the game. We started so well, we had so much control and then in one moment everything can change.

“We have to avoid that, we cannot allow opponents to come back into the game.”

David de Gea enjoyed a very quiet evening between the posts despite keeping out a number of low drives from Brennan Johnson and Morgan Gibbs-White.

The former Wolves man was lively throughout and gave Casemiro a hard evening as he relentlessly pressed the Brazilian.

United now face Reading in the FA Cup on Saturday at Old Trafford as they look to book their place in the fifth round.