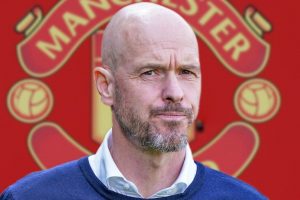 Manchester United have reportedly set a price tag of £60million for Marcus Rashford as the summer transfer window creeps closer. And though he’s keen to talk to Erik ten Hag, there’s no guarantee he’ll be at Old Trafford next season. Should he leave for his asking price, he’ll become the third most-expensive sale in the club’s entire history.

United thought Rashford would return from shoulder surgery a player transformed back in the summer.

Yet the England international has endured a horrendous campaign so far, netting just five times across all competitions under both Ole Gunnar Solskjer and Ralf Rangnick.

It was reported by 90min earlier in the week that the Red Devils had slapped a price tag of £60million on their prized asset, who has attracted interest from the likes of Arsenal and Newcastle.

And if Ten Hag doesn’t consider Rashford to be part of his plans, then a parting of the ways will be on the cards.

Rashford leaving United, for their £60m asking price, would make him the third most-expensive sale in there entire history.

It would still be substantially less than the £80m they got for Cristiano Ronaldo when he departed for Real Madrid in 2009.

That made him the world’s costliest player but he certainly justified Los Blancos’ outlay, propelling them to four Champions League crowns during a nine-year stint.

United dug deep during negotiations with Inter Milan for Romelu Lukaku in 2019.

And the Belgian ended up leaving United for the San Siro for £74m, two years after costing the Red Devils a similar amount.

Rashford would then jump to third on the list if Ten Hag decided to cut him loose and rival clubs come in with a bid.

And Daniel James is next on the list, with Leeds paying £25m to land the Wales international back in the summer.

That’s the same amount the Red Devils demanded when David Beckham transferred to Real Madrid in 2003.

And it remains to be seen what happens with Rashford as the end of the season creeps closer.

“Whether it’s [being] short on confidence, we’ve seen his quality before but we’ve not seen it for a year or two,” said Keane on Sky Sports.

“It’s as if he’s not learnt about the game. He’s drifting. He’s lost the hunger.

“These young players get a lot of money and good luck to them, but I think he’s lost the eye of the tiger and he’s struggling to get it back.”

And he added: “I think he’s taken his eye off the ball, whatever [it is] with his off-the-field stuff.

“Rashford has been around for a few years now, he’s got that experience and played international football.

“Wherever Man United want to go, Marcus is being left behind.

“He’s left out again tonight and he must be sitting on the bench going ‘where has it all gone wrong for me?’. He can get it back, he’s shown it before, but sometimes when you do lose it, it is hard to get it back.

“He’s got to get the hunger back into his game and make the runs like we’ve seen tonight from Elanga. Rashford has lost that bit of hunger, which is huge for a player. He is a talent but we’re not seeing it.”