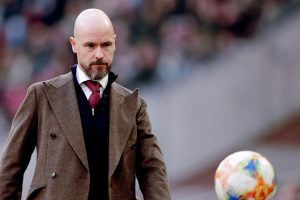 Ajax boss Erik ten Hag has distanced himself from reports linking him to the managerial vacancy at Manchester United.

Ole Gunnar Solskjaer was sacked following United's 4-1 defeat to Watford on Saturday and the club are now frantically searching for his replacement.

The Norwegian had been under pressure for some time, particularly after being convincingly beaten by both Liverpool and Manchester City in recent weeks, and the axe finally swung after the defeat at Vicarage Road.

Ten Hag has emerged as one the top candidates to replace Solskjaer along with the likes of Zinedine Zidane, Mauricio Pochettino and Brendan Rodgers, but the Dutchman insists he's focused on his job at Ajax, and nothing else.

"My focus is on Ajax, the rest only distracts. I expect from my players that they are focused on Ajax, so I have to give the right example for that too," he told ESPN.

"You keep asking me [about my position as Ajax manager], yes it is a weird question. I heard nothing about [United's interest], so I can't think about it.

"I’m in United list with Pochettino? I am focused on my team, we want to achieve a lot."

Ten Hag's comments will come as a blow to United, especially in light of reports that Zidane has rejected the club's advances in the last 24 hours.

Would ten Hag be a good fit for Man United? Let us know what you think in the comments section below…

Even if he is secretly interested, the 51-year-old would be unlikely to quit Ajax mid-way through the season, and United may have to wait until the summer to have any chance of landing him.

Ten Hag, who has been in charge of the Dutch side since 2017, is currently one of Europe's most sought-after coaches.

He's won two Eredivisie titles and famously led his side to the brink of the Champions League final in 2019, knocking out Real Madrid and Juventus before being beaten by Pochettino's Spurs in the dying seconds of the semi-final.

His Ajax side have received plaudits for their energetic high-risk/high-reward philosophy and Ten Hag has been praised for successfully rebuilding a top-quality team after many of his best players were pinched after the Champions League run.

If ten Hag did decide to move to Old Trafford, he would be reunited with former Ajax midfielder Donny van de Beek, who has notably been struggling for game-time since arriving in Manchester a year-and-a-half ago.