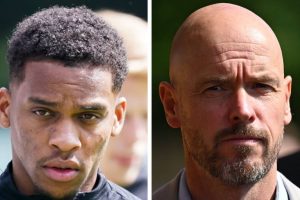 Erik ten Hag has reportedly been left shocked and disappointed that Jurrien Timber is unwilling to leave Ajax and follow him to Manchester United this summer. Ten Hag was keen for the young defender to join him at Old Trafford, but has been snubbed by his former protege.

The 20-year-old defender established himself as one of the best young players in Europe under Ten Hag’s watchful eye at Ajax. So when the Dutchman moved to United he thought Timber might consider joining him.

That hope has not turned into reality, with the youngster instead deciding to stay put. His decision is rooted in a strong desire to make Louis van Gaal’s Netherlands squad for the World Cup later this year.

Former United boss Van Gaal has made it clear he will only select players who are playing regularly and well for their club sides and Timber is concerned a switch could endanger his chances. Gini Wijnaldum was dropped from the most recent squad after struggling to make an impact with Paris Saint-Germain after leaving Liverpool last summer and his situation is a clear warning for players like Timber.

JUST IN: PSG rival Man City for Kalvin Phillips transfer as ‘enquiries’ made

The Mirror reports that Ten Hag has been left ‘stunned’ by Timber’s decision, which has further undermined his efforts in the transfer window. United are yet to bring in any new recruits in the off-season, despite several important players heading for the exit at the end of the month.

United missed out on Darwin Nunez to Liverpool and their top target for midfield, Frenkie de Jong, is proving difficult to lure from Barcelona, who have rejected a £60million bid and are holding out for £80m. Meanwhile, United have made an offer to Christian Eriksen, but are believed to be behind both Tottenham and Brentford in the running for his signature.

Ajax were reported to have put a £36m price tag on Timber to ward off interest from the likes of United this summer. But even if they keep the centre-back, the Dutch champions could lose his partner, with Arsenal stepping up their interest in Lisandro Martinez.

Earlier in the month, former United and current Ajax defender Daley Blind offered Timber a word of advice about his future. “He is wise enough to make his own choices,” he said.

“I don’t need to explain what kind of talent and player he is. How important he is to us. What he shows from the start though is unbelievable. Of course, as a teammate, I hope he stays for another year. I cannot influence that. I can only say that Ajax must do its best to keep him.”