Home » Soccer » England’s last 5 openers, what happened next and worrying record ahead of Euros

England’s last 5 openers, what happened next and worrying record ahead of Euros 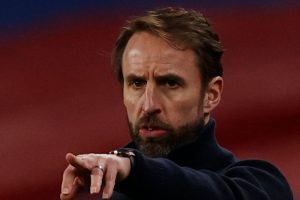 Gareth Southgate will be confident about righting some wrongs as he prepares to take his young England squad to Euro 2020, knowing they have a realistic chance of glory.

The Three Lions will participate in their first major tournament since their agonising World Cup semi-final defeat against Croatia in 2018.

But if anything, it has given Southgate the chance to refresh his squad with an army of talented youngsters, such as Phil Foden and Mason Mount, at the forefront.

England may just be the first team to head into the European Championships as a pre-tournament favourite without ever winning an opening game in the tournament.

Incredibly, the Three Lions have failed to win any of their nine fixtures to open the tournament, with four defeats and five draws.

That is something Southgate will be hoping to put right, even if he personally hasn’t take charge of any of those fixtures, with England set to face Croatia on June 13.

Ahead of the Group D opener at Wembley, Star Sport looks at their previous five Euro curtain raisers…

Roy Hodgson’s side went into the tournament with high hopes but left themselves with a lot of work to do after a drab display in their tournament opener in France.

The Three Lions had dominated at the State Velodrome but were left frustrated by an organised if not uninspiring Russia side. That was before Eric Dier curled a free-kick past Igor Akinfeev to give them the lead on 73 minutes.

But two minutes into stoppage time, veteran defender Vasili Berezutskiy rose high to head home at the far post to deny England what would have been their maiden victory in a European Championship opener.

That set the tone for an unconvincing tournament for England, despite qualifying top of the group with wins over Slovakia and Wales.

They would go on to become the subject of one of the biggest shocks in international football after losing 2-1 to minnows Iceland in the last-16 knockout round, which eventually made Hodgson’s position untenable.

It was a clash that promised to sparkle with tempers and temperatures rising as England ended their eight-year absence from the Euros. But just like the sun over the Donbass Arena, this contest quickly faded.

There were no winners other than Manchester City after two of their players found their net. Joleon Lescott’s fine header found the net from Steven Gerrard’s free-kick but Samir Nasri levelled for France with an excellent strike from 20 yards.

Despite being pegged back, it was a solid result for England to build on and they would use that confidence to secure narrow victories over Sweden and hosts Ukraine to top the group.

Hodgson’s side would reach the quarter-finals where they met Italy and after yet another cagey contest, it went to penalties. The rest is history, as Andrea Pirlo pulled off a famous panenka to help the Azzurri dump out England in devastating fashion.

Inside the electric Estadio da Luz, England took on France as their so-called ‘Golden Generation’, guided by an 18-year-old Wayne Rooney, eyed their first international success since 1966.

They began in fine fashion when Frank Lampard headed home the opening goal from David Beckham’s trademark delivery. But England, then managed by Sven Goran Eriksson, collapsed in stoppage time.

Zinedine Zidane struck a wonderful free-kick to equalise before the Real Madrid star slotted home a penalty after Thierry Henry was brought down by David James.

Eriksson’s men recovered quickly from their disappointment to beat Switzerland and Croatia to qualify in second in their group, before losing out to Portugal in the quarter-finals on penalties having lost Rooney to a broken metatarsal during the game.

It had all started so well.

Paul Scholes and Steve McManaman had given England boss Kevin Keegan a dream start with two goals inside the opening 18 minutes.

But this Portugal side were made of strong stuff and levelled the match before the interval with Figo and Joao Pinto grabbing the goals.

Injuries to McManaman and Michael Owen seemed to affect England’s momentum and the influential Rui Costa split the defence open for Nuno Gomes to strike home the winner on the hour-mark.

After beating Germany, England only required a point against Romania to go through. But despite leading 2-1 through Alan Shearer and Owen, they conceded twice to go out in the group stage.

Keegan resigned in October and, after two caretaker managers in Howard Wilkinson and Peter Taylor, the job was given to Eriksson in 2001.

On home turf, it would have meant everything to kick off Euro 96 with a victory in front of 76,000 fans at the ‘old’ Wembley.

Alan Shearer’s goal got Terry Venables’ side off to a flier but their inability to kill off plucky Switzerland would come back to haunt them when Kubilay Turkyilmaz dug out a late equaliser against the odds.

But guided by Shearer’s goals and Paul Gascoigne’s excellence, the tournament hosts breezed past Scotland and the Netherlands to reach the next phase.

After overcoming Spain on penalties in the quarter-finals, England would suffer the most heartbreaking of shootout defeats at the hands of Germany in the last four when Southgate, of all people, missed his spot-kick.

Needless to say, the now-England head coach will be hoping to eradicate those demons from his playing days.