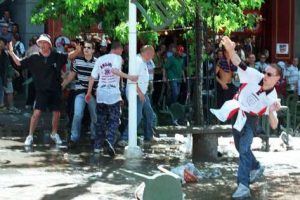 It has almost been 21 years since English football encountered one of the darkest summers in its history at Euro 2000.

This weekend the Three Lions will get their Euro 2020 campaign underway 12 months later than expected, with last year's tournament put on hold due to the coronavirus pandemic.

Yet even if Gareth Southgate's men fail to come up trumps this summer, it would take something out of the ordinary, something quite scandalous to rival that infamous Belgium showpiece over two decades ago.

Following a turbulent qualifying campaign, England found themselves as one of the lowest seeds in the draw for Euro 2000, meaning they were placed in a nightmare group alongside Portugal and old rivals Germany – whom they were also competing with to stage the 2006 World Cup.

Kevin Keegan's side were beaten in their first outing by Portugal, somehow coming away with a 3-2 defeat despite initially leading by two goals.

That made their showdown with the Germans all the more crucial, as victory was needed to keep their hopes of qualification to the knockout stages alive.

Yet before the match played out, England hooligans who made the trip to Belgium brought shame on the nation by sparking violent scenes in Brussels and Charleori.

The travelling fans clashed with German counterparts prior to the game, with police forced to fire tear gas and bring in plain-clothed officers to wrestle them to the ground and make arrests.

Over 900 supporters were arrested by police and more than 400 of them were eventually deported, confirming pre-tournament fears about English hooliganism just weeks after trouble at Arsenal and Galatasaray's UEFA Cup final in Copenhagen.

England ran out winners against Germany, edging out a narrow 1-0 victory thanks to an Alan Shearer header.

However, the joy of that win was quickly soured when UEFA president Lennart Johansson threatened to kick the Three Lions out of the competition following the ugly antics of their travelling support.

Johansson said: "Fans cannot be allowed to behave like this again and create havoc. The UK government owes it to everyone concerned to take similar steps to those taken in other countries to stop those troublesome fans from travelling abroad.

"Other governments have shown that it can be done. The UEFA executive committee called on the government of the UK and the Football Association of London to take the necessary steps to stop English hooligans from travelling abroad."

"Uefa will have to determine whether the presence of the English team in the tournament should be maintained should there be a repetition of similar incidents. We cannot afford a repeat of the fans' behaviour of recent days."

UK Prime Minister Tony Blair even voiced his concerns over the ultimatum and said: "Hopefully this threat will bring to their senses anyone tempted to continue the mindless thuggery that has brought such shame to the country."

UEFA then called on the British government to hand out appropriate punishments to the fans in question when returning home, with chief executive Gerhard Aigner saying: "These English hooligans are a disgrace to their country and a blight on their national team.

"The actions of the last 48 hours have left a scar on our tournament and left us wondering why more was not done to prevent them travelling. The events of the last few days cannot be allowed to continue.

"Euro 2000 is a celebration of European football and not an excuse for a small minority of English fans to cause havoc.

"We are calling on the UK government and to everyone concerned to take action similar that taken in other countries to stop these so-called fans travelling abroad.

"We cannot allow a small (group) to spoil an international tournament for genuine fans.

"Other governments have shown that it can be done and we call on the UK government to take the necessary steps as a matter of urgency."

While they only needed to secure a point in their final group outing against Romania to progress, England went into that decider knowing they could be dumped out of the tournament regardless if similar violence played out in the streets.

Fortunately that didn't happen, but Keegan and co were still sent packing anyway when they blew a 2-1 lead in that final match.

Goals from Shearer and Michael Owen had swung the game in England's favour after Cristian Chivu had given Romania the lead, only for Dorinel Munteanu to level proceedings after the interval.

And late on in the game Ioan Ganea scored from 12 yards after Phil Neville brought down Viorel Moldovan inside the box, sending the Three Lions home and capping a true nadir in English football.