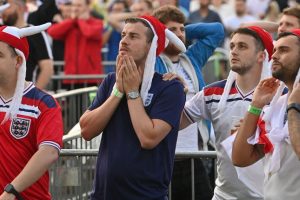 England will be denied a victory parade if they win the European Championships.

Gareth Southgate's side are into the semi-finals of the competition after Saturday's thumping 4-0 quarter-final win over Ukraine.

The Three Lions didn't have to break a sweat in Rome, with goals from Harry Maguire, Jordan Henderson and a Harry Kane brace securing England's spot in the last-four.

Next up it's Denmark at Wembley, and if England can come through that test then they'll have a real chance of winning a major tournament for the first time since the 1966 World Cup.

However, even if they do manage to go all the way next Sunday, they are unlikely to hold a victory parade because of Covid-19.

An open-top bus parade is the customary way to celebrate a sporting success.

Crowds lined the streets of London when the England Cricket Team regained The Ashes from Australia in 2005.

But current Covid-19 restrictions make a repeat of those jubilant scenes a non-starter.

According to a report in The Times, the alternative 'could be staging a ticketed event at Wembley' or somewhere else in the capital.

Do you think England can win Euro 2020? Let us know in the comments section.

Fans would be required to enter a ballot for the chance to see their heroes with the European Championship trophy.

And while supporters are beginning to dream of football coming home, Southgate is keeping his feet firmly on the ground – well, sort of.

"It's fabulous," Southgate told BBC Sport. "I suppose it's still sinking in that it's another semi-final – three in three years.

"We want to go two steps further. It's fabulous for our country – a semi-final at Wembley.

"I know what will be happening at home. It's lovely to see everyone on a Saturday night, beer in hand. They should enjoy it. It's been a long year for everyone.

"I'm chuffed the two performances [against Germany and Ukraine] have brought so much happiness to people."