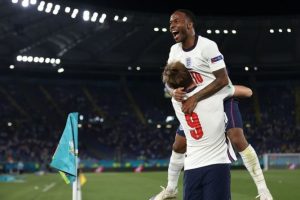 Euro 2020: Clive Tyldesley on being 'part of history'

England will go head-to-head with Denmark this evening for a place in the final of Euro 2020. The Three Lions have enjoyed a remarkable tournament and are yet to concede a goal at the competition.

Denmark will certainly pose a lot of threats in the contest, though Gareth Southgate’s side will look to take advantage of playing in front of a home crowd.

A number of players have impressed for England at the European Championships, with certain members of the squad further raising their profile.

There were many doubts as to whether or not Raheem Sterling should be starting for England at this tournament, with many of the view that his place was at risk due to a below-par season at Manchester City.

But Sterling has responded to his critics in emphatic style and has acted as the Three Lions’ main goal threat at the tournament.

The 26-year-old has three goals to his name at Euro 2020 as well as one assist and is a certainty to hold down his place in the team.

His inclusion is bad news for the likes of Jadon Sancho, Marcus Rashford and Jack Grealish, but Sterling has shown he is worthy of the starting spot.

JUST IN: England warned over ‘biggest test’ of Euro 2020 vs Denmark – EXCLUSIVE

After a brilliant season with Manchester United, Luke Shaw’s fine form has continued on the international stage.

Shaw was left out of England’s opening group stage against Croatia, but has featured in every game since then to keep Kieran Trippier and Ben Chilwell out of the team.

The former Southampton defender has displayed his attacking output in recent games, providing an assist for Sterling’s opener against Germany and teeing up two goals in England’s 4-0 victory over Ukraine.

Harry Maguire’s participation in Euro 2020 was in doubt prior to the tournament due to an injury sustained at the end of the season with United.

The Three Lions coped well in his absence against Croatia and Scotland, but the 28-year-old has looked far more assured in possession in comparison with Tyrone Mings.

Maguire’s ability to play out from the back has been useful in the system played by Southgate and the former Leicester City man is always a threat from set-pieces – as shown against Ukraine.

DON’T MISS
Clive Tyldesley on Euro 2020 – ‘Small part in those historic moments’
Boris launches bid to bring 2030 World Cup to Britain with Ireland
England shirt: Where to buy an England shirt ahead of Denmark clash

Had Euro 2020 taken place when it was originally supposed to, there’s a good chance John Stones would not have featured at all for England.

Stones started only 12 Premier League games for Pep Guardiola’s side in the 2019/20 season and had fallen out of favour at the club.

But the Barnsley-born defender has experienced a revival at City and has helped the Three Lions keep a clean sheet in every match at the tournament.

After a slow start to the tournament, Harry Kane looks back to his best.

The Tottenham Hotspur striker has repaid the faith placed in him by Southgate by scoring three goals in his previous two games.

Kane looked out of place in matches against Croatia, Scotland and Czech Republic but is now beginning to stamp his authority on games.

The 27-year-old is full of confidence once again and will fancy his chances of adding to his goalscoring tally.