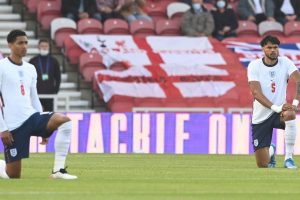 Gareth Southgate admits his England stars could stop taking the knee ahead of the Euros if fans continue to boo them.

Southgate's Three Lions have been performing the anti-racism gesture in support of the 'Black Lives Matter' movement.

But Southgate and his men were left stunned when Three Lions supporters jeered them for doing it ahead of Wednesday's warm-up clash with Austria at the Riverside.

Southgate will hold urgent talks with his players to see if they want to continue taking a knee during the tournament – amid growing concern the gesture has lost its impact.

The European Championships is one of the most watched events in world football and there's an acknowledgement that continuing the gesture will make a major global impact.

UEFA have strict rules regarding political statements – but have allowed Three Lions stars to take the knee during the Nations League and are unlikely to change their stance during the Finals.

There is a feeling among senior members of the squad the act continues to transmit a powerful message, but Southgate is no longer convinced after what happened in Middlesbrough.

He said: "What has happened (in Middlesbrough) probably means I need to have another conversation with the players, first and foremost, because I need see how they feel about it.

"That's an important discussion for us to have. I know there was some concern in the past in March that we were losing some of the impact.

"So I think after what has happened we need to consider whether we continue to do the same thing, or whether we do something different and I'm sure the players will have a really good view on that."

Southgate, meanwhile, has defended his decision to keep faith with crocked stars Jordan Henderson and Harry Maguire, despite the duo facing up to the prospect of missing England's opening Group D game with Croatia on June 13.

Henderson (groin) has not played for three months, while Maguire (ankle ligaments) has been sidelined for almost four weeks.

But Southgate added: "I've picked a squad that can cope without them. If we had 23, that might have been a different decision to make.

"But we've got 26, so rather than take maybe a couple of young players for the experience, for me it's better to have two senior players who can add so much to the group, and if we can get them in a position to help on the field, then that's only going to be beneficial for us."