Home » England fans want Lampard snubbed as England U21 manager – in favour of his No.2 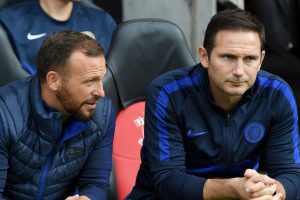 Frank Lampard has been linked with the vacant England Under-21s job following Aidy Boothroyd’s departure – but fans would rather see his No.2 Jody Morris take the reins.

Boothroyd has stepped down as U21 boss after seven years in charge, with his side’s recent elimination in the European Championship group stages sealing his fate.

Talk of his successor is therefore underway, and former Chelsea head coach Lampard is understood to be amongst the frontrunners to replace him.

Lampard has been out of work since being sacked by the Blues in January, a decision regarded by many as typically premature on Roman Abramovich’s part.

The ex-England midfielder impressed during his 18-month spell at Stamford Bridge, securing an unlikely top-four finish and reaching the FA Cup final in his first season at the helm.

However, Three Lions supporters have taken to social media to call for his assistant Morris, who has enjoyed great success with Chelsea’s youth sides in the past, to instead replace Boothroyd.

“This should be Jody Morris job all day long,” said another.

A third commented: “The England U21 job is perfect for not only Frank Lampard but Jody Morris too. Just have to look to the role Mount and James will play this summer to see there being a big pay off 4 or so years down the line”.

“Get Jody Morris in. Brought tons of success to the Chelsea academy,” put another.

While one simply said: “Time for Jody Morris”.

Morris, who made 124 appearances for Chelsea in his playing career, spent five years working in the club’s academy, becoming head coach of the U18 side in 2016.

He inspired the team to FA Youth Cup glory in both of his seasons in charge before leaving to assist Lampard in his first managerial post at Derby in 2018.

The pair came close to guiding Derby into the Premier League at the first time of asking, losing 2-1 against Aston Villa in the Championship play-off final before heading back to Chelsea.