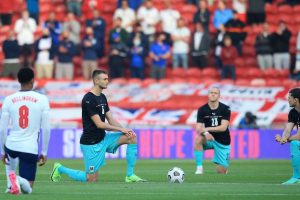 England fans have been branded "pathetic" on social media for booing players taking the knee before their friendly against Austria on Wednesday night.

Before kick-off in Middlesbrough Three Lions stars and their Austrian counterparts took the knee in the fight against racism, a gesture which has been carried out across the country since football resumed after the coronavirus pandemic last year.

However, the move did not go down well with a large section of supporters in attendance at the Riverside Stadium, who could instead be heard booing.

Some watching at home have taken to Twitter to lambast the fans in question, with one even labelling them "less than human".

One said: "Clear boos from the fans when the teams took the knee at the Riverside, Middlesbrough. That’s a pretty sour start to this England match, horrible."

Another put: "The fans at the England vs. Austria friendly who decided they were there to boo the players for a unanimous (planned and sanctioned) stand against racism and hate certainly seem to be proving their point that some folks are less than human."

A third wrote: "Seeing fans in #Middlesboro boo players for taking the knee to stamp out racism – esp. in an England team full of black players – makes me so ashamed of the NE. Shameful! #ENGAUT".

talkSPORT presenter Max Rushden also chipped in and said: "People booing the taking of the knee is even more reason why it needs to keep happening. Well done to those fans that applauded to drown out the boos." According to The Telegraph, the FA has been contemplating ways to prevent fans from booing players taking the knee before England matches.

One of their ideas is to release a film educating fans about the reason why Three Lions stars are continuing to take the knee in the fight against racism.

Fans have been booing players taking the knee since they were allowed to return to football stadiums across the UK last month.

Mings wrote on Twitter after the game: “To anyone that booed us taking the knee, have a look at yourself and ask if you truly support equality and equal opportunity for the black players on the pitch. It’s tiring. Educate yourself.”