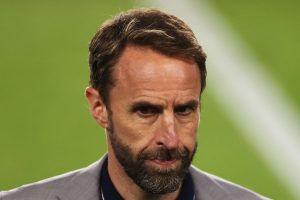 England fans have been left scratching their heads after Gareth Southgate picked a centre-back at right-back for Sunday’s match against Romania – despite having four right-backs in the squad.

Southgate’s decision to include four right-sided full-backs in his 26-man squad for the European Championship has been the cause of much discussion since details emerged last week.

Kieran Trippier, Kyle Walker, Reece James and Trent Alexander-Arnold all received the nod for the pan-continental tournament, although the latter of the quartet will now miss out through injury.

That still leaves three right-backs for Southgate to choose from – so it’s a mystery to some why he opted to go with a centre-half in the full-back position for Sunday’s warm-up game against Romania.

Despite Trippier being named on the bench for the match at the Riverside, it was Ben Godfrey who was picked in the starting XI at right-back.

Supporters couldn’t understand the logic behind the decision and chose to vent their frustrating on Twitter.

One wrote: “When you’ve only selected 32 right backs in the squad, so you have to get a centre back to fill in…”

While another said: “A million right backs and play a centre back there.”

What do you make of Southgate's decision to start a centre-back at right-back against Romania? Let us know in the comments section.

A third person added: “comedian southgate picking 4 right backs to play a centre back at right back.”

“6 million right backs either in the squad or available for selection and he plays a centre back there”, was the view of a fourth bemused fan.

Southgate opted to field a more experimental side against Romania, with Sam Johnstone, Ben White, Tyron Mings and James Ward-Prowse among those given a chance to impress.