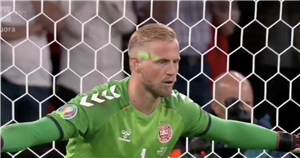 An England fan appears to have flashed a laser pen in Kasper Schmeichel's face during his penalty face-off with Harry Kane.

The Three Lions captain managed to find a way past Denmark's shot-stopper in extra time during the Euro 2020 semi-final clash.

His original effort into the bottom-right corner was saved but the forward was first to the Leicester star's rebound, securing a 2-1 win.

It means England are into a major tournament for the first time in 55 years, facing Italy for a shot at the Henri Delauney Trophy at Wembley on July 11.

But footage from Finnish channel yle TV2 seems to show that a fan was shining a laser in Schmeichel's face during the penalty. In the penalty, with the Dane trying to out-wit Kane, green marks can be seen flashing across his face.

England were behind after 30 minutes in front of the 66,000 fans when Mikkel Damsgaard scored a sensational free kick.

But they were level eight minutes later as Simon Kjaer put the ball into his own net under pressure from Raheem Sterling.

The Three Lions then grew into the game to create several chances but only got the golden one in the 104th minute, the Manchester City forward getting clipped.

Do you think football's coming home? Let us know in the comments section. It means England will play their first major tournament final since winning the 1966 World Cup against West Germany.

Denmark may be left feeling frustrated as the ITV pundits in the studio felt the penalty award was soft.

Ian Wright said: "Of course it's soft but we've seen those given all season."

While Roy Keane responded: "Wrighty, you're going to defend him anyway, no matter what."

But the former Arsenal forward said: "It's not a case of defending him. You know how it is. It's soft but those have been given all season."

We'll be bringing you the very latest updates, pictures and video on this breaking news story as it unfolds.

For all the latest news, make sure you visit: dailystar.co.uk/sport/football

And you can stay up to date with all the must-see headlines, pictures, analysis, opinion and video on the stories that matter to you.