Home » Soccer » England Euro 2020 squad guide: Ones to watch, odds and more ahead of Scotland game

England Euro 2020 squad guide: Ones to watch, odds and more ahead of Scotland game 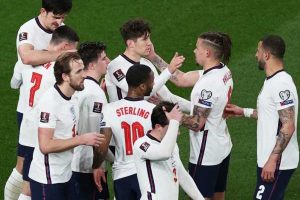 Is it coming home? Well, in a way, it’s already here. England will play all three of their opening Euro 2020 games at Wembley. Top the group and Gareth Southgate and players will only need their passports once on their path to the final, which will also be held at the national stadium. After 55 years of hurt, Harry Kane could emulate Bobby Moore by leading his country to glory on the hallowed Wembley turf.

That is not the only cause for optimism. Southgate is selecting from one of the strongest and deepest English talent pools in recent memory, with those at their peak like Kane, Raheem Sterling and Harry Maguire supplemented by young prospects Phil Foden, Jadon Sancho and ‘not-yet-old-enough-to-buy-a-pint’ Jude Bellingham. Others like Mason Mount and Jack Grealish have also emerged to much excitement.

There is so much talent, in fact, that Southgate already has a problem fitting all of his most gifted players in, even with Uefa expanding squad sizes from 23 to 26. Trent Alexander-Arnold has arguably been the finest young right-back in Europe over the past three years but he was surprisingly left out of the March internationals and his hopes of a place in the final squad look bleak.

If Alexander-Arnold spends his summer on the sofa, it will only be after much deliberation on Southgate’s part. There will be a detailed, considered and perhaps persuasive explanation. Even so, it will be the England manager’s biggest call since phasing out all-time leading goalscorer Wayne Rooney and his most contentious since practically becoming a national treasure during the 2018 World Cup.

Southgate-mania has waned slightly since that summer though, the M&S waistcoats are collecting dust. Criticism has mostly come from a minority of supporters rather than pundits or the press but it has focused on a few common themes. Southgate has been labelled a conservative coach, one who makes uninspiring selections in midfield and who shows a reluctance to trust unique talents like Grealish.

Much of that is unfair, and ignores the complexity of building a balanced side, but there have been some setbacks and underwhelming performances since the World Cup. The Nations League semi-final collapse against the Netherlands in 2019 bore similarities to the Croatia elimination a year earlier, and underwhelming performances in the same competition this season saw England briefly threatened by relegation.

Reaching this tournament was not without the one blemish, either. England suffered their first qualifying defeat in a decade against the Czech Republic, who they will meet again in Group D alongside Croatia and Scotland. A draw that appears straightforward on paper in fact includes two of the few nations to have beaten Southgate’s England during his four-and-a-half years in charge and the oldest of enemies.

Still, with the best third-placed teams reaching the knock-out stages, England should have more than enough to progress. The real test of their credentials as joint-favourites alongside France will be against the world champions and other leading nations of their calibre. England have not had this much quality at their disposal since the early to mid-2000s, and certainly have more than enough to compete, but will need to rediscover the magic of three summers ago in order to end their long wait for success.

If you can still qualify as a breakout talent when you’ve won three Premier League titles and are preparing for a Champions League final, then Foden is surely

England’s draw is relatively kind, even if it includes World Cup conquerors Croatia, but winning Group D would probably mean playing one of France, Germany or Portugal in the last-16. That would be a true test of their status as joint-favourites. It could either kick-start another summer of Southgate mania or lead to the same old blame games and recriminations. And for all England’s talent and recent progress, you still expect them to come up short. Semi-finals again, maybe.