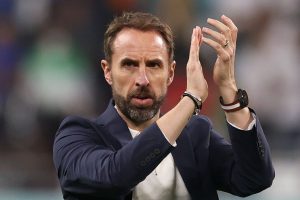 World Cup: Players 'should have worn the armbands' says Keane

England manager Gareth Southgate may be feeling the pressure to deliver a first World Cup for England in 56 years after it was revealed he is the second-highest earning coach in Qatar. Out of the 32 national team bosses at the tournament in the Gulf state, Southgate is only second to Germany’s Hansi Flick in the rich list rankings as European bosses dominate the top 10.

The 52-year-old reportedly earns just over £5million-a-year after he signed a new contract in 2021, which runs until the next major tournament at Euro 2024. That figure is only trumped by former Bayern Munich coach Flick, who takes home around £5.6m-a-year, equivalent to around £100,000-a-week, according to Catalan outlet Sport.

National coaches are typically a lower amount than club managers due to the more relaxed fixture schedule, with around 12 matches a year to oversee compared to over 60 that Premier League bosses face.

But Southgate is regularly spotted in the stands attending matches to keep a close eye on his England players’ form at club level, with his assistant Steve Holland also travelling to top-flight matches.

Still, it is an amount that puts Southgate way beyond other experienced coaches who can boast a more impressive CV. Spain coach Luis Enrique is thought to earn just a fifth of what the England boss collects annually, while Argentina boss Lionel Scaloni receives less than half than the former Middlesbrough boss.

At the opposite end of the scale, Tunisia’s Jalil Kadri – on £120,000-a-year – staggeringly is thought to be earning 40 times less than Southgate’s yearly salary.

The Three Lions boss would perhaps argue he deserves such a salary after guiding England to the 2018 World Cup semi-finals and the Euro 2020 final in his previous two tournaments. Having taken over in 2016 from Sam Allardyce, Southgate boasts a win rate of over 60 per cent and is England’s longest-serving manager since the late Sir Bobby Robson.

There were questions raised about the Football Association’s decision to hand Southgate another lengthy deal and those criticisms only increased after going winless in their Nations League campaign.

But he has shaken off those dissenting voices so far in Qatar after watching his side run riot with a 6-2 victory over Iran in their Group B opener, with Bukayo Saka scoring twice in addition to Jude Bellingham, Marcus Rashford, Jack Grealish and Jude Bellingham all getting on the scoresheet.

The highest-paid coaches at the World Cup (source: Sport.es)