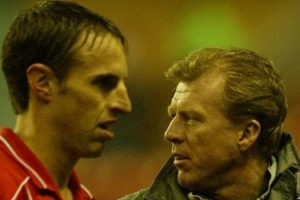 Steve McClaren is not surprised by Gareth Southgate’s success with England and says he was a natural-born leader during his playing days at Middlesbrough.

With McClaren as manager and Southgate as captain, Boro enjoyed their most successful period in their history – winning the 2004 League Cup and reaching the 2006 UEFA Cup final.

McClaren is in no doubt Southgate was key to the club’s success and believes he can handle the pressure to lead England to their first trophy since 1966.

Speaking exclusively to Sky Sports News, McClaren said: “He always handled himself well and people say, ‘can the players handle the pressure?’

“They will be looking to Southgate to do that and will follow his lead and he handles pressure really well.

“That is one thing I did notice when I signed him and worked with him for five years – he never over-celebrated or got too low.”

On his leadership ability, McClaren added: “That is why I signed him! I wanted someone who could lead the dressing room, that the players could follow. He was a great example of what a professional footballer is all about – first in, last away.

“What he did at Middlesbrough and what he is doing now with England is garnering team spirit.

“We had a lot of foreigners at Middlesbrough and they would all have had their cliques.

“What he did would sit at a different table every mealtime, talk to everybody, he was the glue.

“He brought everybody together and knew that everybody had to be [together].

“He has come through the system, learned his trade and worked with the U21s which I think has been an advantage.

“He knows the kids and is now maturing them. They are following him. He is an ultimate professional and he will keep their feet on the ground.”

It doesn’t get much more comfortable than that. England’s controlled and dominant 4-0 win over Ukraine means they will face Denmark in the Euro 2020 semi-final at Wembley on Wednesday. Are the stars aligning for Gareth Southgate’s side? And how has he managed to rid England of the fear factor?

Alice Piper is joined by Rob Dorsett, Adam Bate and Gerard Brand to discuss the win in Rome, as Harry Kane returns to form, Luke Shaw shows up Jose Mourinho in his new manor and England keep another clean sheet. It’s all looking rosy, right?

Listen on your podcast provider here