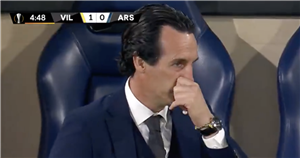 Unai Emery did his best to stifle any emotion as Villarreal opened the scoring against Arsenal in just five minutes on Thursday.

This is the first time the Spaniard has come up against his former team after he was sacked in 2019.

Emery spent some time out of the game before he took over at Villarreal and has guided the Spanish club to seventh in La Liga.

Villarreal have a good chance of winning the Europa League this season, having reached the semi-finals with Arsenal.

And in their first leg on Thursday, the Spaniard's side took the lead in just the fifth minute.

As to be expected, BT Sport cameras focused on Emery the moment the ball hit the back of the net.

But despite Emery being delighted with his side's bright start, he did his best to stifle any emotion and instead grabbed his nose.

Ahead of the match Mikel Arteta, who succeeded Emery at Arsenal, admitted his side were going to be in for a tough game.

And he pointed out that this is largely down to Emery and Arsenal's recent history.

"It's always a special game, it's got a lot of ingredients," said Arteta.

"There is that relationship because Unai worked for the club not long ago, so there's that ingredient. We want to win for each club, that's it."