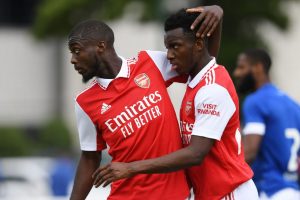 Arsenal's faith in Eddie Nketiah is already paying off after the striker scored a hat-trick against Ipswich in a pre-season friendly.

It's been a brilliant 12 months for Nketiah, as not only has he found his Premier League form, he's been given a bumper new contract and a new number. It looked as though Nketiah could follow both Alexandre Lacazette and Pierre-Emerick Aubameyang out the door, but the youngster has signed a new deal.

And he looked as lethal as ever at London Colney on Saturday as Arsenal thrashed Ipswich Town, leaving fans excited for the season ahead. And with Gabriel Jesus set to sign, Arsenal could be a very different side going forward next season.

It was a prolific day at the office for Nketiah, as he scored three goals and even provided an assist inside 35 minutes against Ipswich. Nketiah opened the scoring after just 30 seconds before assisting Albert Sambi-Lokonga, who will be looking to improve on last season.

The 23-year-old then completed his hat-trick in a very different looking Arsenal line-up. With some stars still away on holiday after international duty, it was a good chance for Mikel Arteta to trial some of the talent on the fringes.

Hector Bellerin, Pablo Mari, Ainsley Maitland-Niles and Reiss Nelson all played after spending last season out on loan, and outcasts Bernd Leno and Nicolas Pepe also started the game. Multiple youth stars were then given a chance once the Gunners were 4-0 up, and Folarin Balogun managed to get in on the action by scoring Arsenal's fifth.

Ipswich did pull one back, but the damage was already well and truly done, and it was a positive afternoon for Arteta. The Gunners have signed Matt Turner, Marquinhos and Fabio Vieira so far this summer, with Jesus on the way.

Edu and Arteta have been well backed again this summer, after being the Premier League's biggest spenders this time last year. Arsenal are determined to get back to their best, and Arteta remains the man for the job in their eyes.

They missed out on Champions League football right at the end of last season, and it was north London rivals Tottenham that swooped in. The battle for top four is expected to be even tougher next year, with a sizeable gap still yet to be made up between Liverpool, Manchester City and the rest of the league.