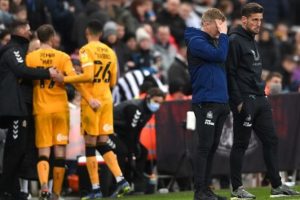 Newcastle boss Eddie Howe has sent a warning to his stars who ignored Kieran Tripper and failed to applaud the home fans after their embarrassing FA Cup defeat against League One side Cambridge. Newcastle started a strong team, with the likes of Trippier and Allan Saint-Maximin playing but were dumped out of the competition after losing 1-0 to the U’s.

Trippier made his well-awaited debut for his new club after signing for £12million from Atletico Madrid on Friday.

The right-back failed to do anything of note, but it was the attacking contingent at Newcastle that took the brunt of the blame after failing to break down Mark Bonner’s side.

Goalkeeper Dimitar Mitov did however produce a once-in-a-lifetime performance, making a string of great saves to book Cambridge’s place in the fourth round.

After the loss, boos rang out around the stadium as the Newcastle fans made their feelings known.

JUST IN: FA Cup fourth round draw: Every team through to round four and their ball numbers

Yet with many of the players walking straight down the tunnel as they hung their heads in shame, this provoked even more of a reaction from the fans.

And Howe reminded players of the way that he expects them to behave after Trippier had to try and convince his team-mates to address their fans at the end of the game.

“Sometimes, that’s very difficult to do when you haven’t had a positive result. Some players probably want to just immediately leave that situation, but we encourage them to recognise the supporters.

“Sometimes, that’s the most important time to do it when the result hasn’t been good so we have to stand up, take the criticism but still acknowledge the people who have paid big money to come and watch us.

“I never run from that moment. I don’t think that’s right.

“From my perspective, especially, you have to be brave enough to front up even if you’re aware that you may potentially be criticised for that. I’d still much rather it that way than not being seen.”

The result is Newcastle’s fifth FA Cup third-round exit in 10 years, with their lack of trophies owing much to their poor performances in knockout football.

A 0-0 draw to Burnley followed by a penalty shoot-out loss to the Clarets in the second round of the Carabao Cup – where Premier League teams enter – means that Newcastle have now gone 67 years without a major domestic trophy in England.

The Magpies only have one Intertoto Cup trophy to their name since.

Saturday’s defeat will however allow Howe to focus solely on Newcastle’s relegation fight, with the club currently 19th in the Premier League on just 11 points.

Howe will be desperate for his side to bounce back straight away with a crucial relegation six-pointer against Watford up next.