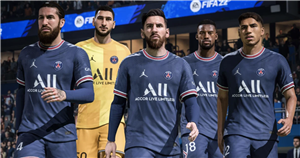 Lionel Messi's arrival at PSG has led EA Sports to joke that they should be the first six-star team in the history of the game with Neymar and Kylian Mbappe set to start among a host of superstars.

As well as the six-time Ballon d'Or winning forward, Sergio Ramos, Gianluigi Donnarumma and Georginio Wijnaldum all joined the club for free this summer in a dream window for Mauricio Pochettino.

Neymar and Mbappe are set to lead the line alongside Messi with Ramos and Donnarumma joining a defence that includes captain Marquinhos as well as £50m full-back Achraf Hakimi and Layvin Kurzawa.

With Wijnaldum hoping to join Marco Verratti and Idrissa Gueye in midfield, accomplished internationals like Angel Di Maria, Mauro Icardi, Keylor Navas and Ander Herrera could all be out of favour.

The recent additions prompted EA Sports to write on Twitter: "Should PSG be our first six star team?"

One fan said in response: "I feel they have a 6 stars offence and defence, not sure about their midfield though. Common Leandro Paredes, Verratti and Wijnaldum; good, not great!"

With a third saying: "Messi, Neymar and Mbappe is the greatest front 3 I think that has ever existed."

Will PSG win the Champions League next season? Give us your prediction in the comments section

Messi said when asked about Pochettino's impact on his arrival: "When I saw it was possible, I spoke with him (Pochettino) straight away. I've known him for a while.

"I spoke to him, the fact we are the two Argentines helped a lot. We spoke, it went well to begin with. The technical staff at PSG helped my decision."

Adding when asked about the idea of playing alongside Mbappe and Neymar: “It’s madness to be able to work with such great players on a daily basis."

And saying of his fellow summer arrivals: “PSG have made spectacular signings on top of the players that were already here.

“I’m eager to get playing and I’m going to be doing it alongside some of the best players in the world.

It’s going to be a marvellous experience every day. I hope I can continue to win titles. I have the same hunger as when I was younger.”