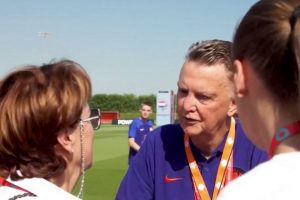 Sex-mad Netherlands manager Louis van Gaal has been filmed telling his wife she can come to his hotel room "to get laid".

The Dutch boss was caught on camera making the X-rated remark as he spoke to his wife Truus during the national team's training session on Tuesday. Truus and other members of the squad's families were present at the Netherlands' training base in Qatar following their win over Senegal on Monday.

Dutch outlet De Telegraaf managed to capture a conversation between the married couple, during which Van Gaal rudely quipped: “But you can come to the hotel. Just to my room. To get laid.”

The former Manchester United manager could then be seen chuckling and smiling at his comment as his wife turned away from him.

Van Gaal was in a positive mood on Tuesday, having seen his side claim all three points in their opening group match thanks to a pair of late goals.

How far will the Netherlands go at the World Cup? Let us know in the comments section below.

Holland had been frustrated by Senegal for much of the match before Cody Gakpo broke the deadlock inside the final 10 minutes. Davy Klaassen then doubled their lead in stoppage time to seal victory.

The Oranje will now turn their attention to Friday's match against Ecuador, who also won their first match, before ending the group stage against host nation Qatar next Tuesday.

Van Gaal is now in his third spell in charge of the national team and previously guided them to third place at the 2014 World Cup during his second stint in the dugout.

He was appointed manager once again last summer following the Euros and went on to help the side qualify for this year's tournament after failing to reach the 2018 edition in Russia.

The veteran manager had already raised eyebrows with his comments before the tournament had even started as he discussed the process of selecting his squad earlier this month.

Discussing how he told several players they would not be in his final 26-man squad, Van Gaal revealed: “I called the players who I didn’t include from 8.30am until 10.00am. I saw players naked, still laying in bed this morning while I had to call them.”