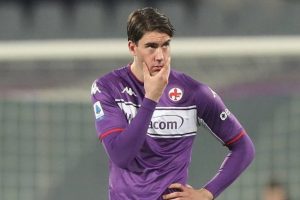 Arteta comments on Arsenal transfer plans ahead of January window

Fiorentina are reportedly open to selling Dusan Vlahovic to Arsenal in the January transfer window. Vlahovic is the Gunners’ number one target as they search for a new striker this month and Mikel Arteta’s side have been given a boost in their pursuit, according to Sky Sports.

The 21-year-old forward has been on fire for Fiorentina over the past few years, with his relentless goal scoring establishing him as one of the most in-demand players in Europe.

He scored a sumptuous chip in La Viola’s 6-0 thrashing of Genoa on Monday night to move onto 17 goals in just 21 Serie A appearances this season.

With just 18 months remaining on his contract, the Serbia international has emerged as a realistic proposition for Arsenal, who face an uncertain situation with their current strikers.

According to Corriere della Sera, Arsenal have made a bid of £60million plus Lucas Torreira, who is currently on loan with Fiorentina, to try and persuade the Italian club to part with their star player.

Fiorentina want to clear up the situation, with chief executive Joe Barone admitting last week that they are desperate for clarity.

“We expect Dusan to make a decision on his future immediately, we need an answer if he stays or wants to leave,” Barone said.

“We asked Dusan two days ago to decide and communicate his plan in public immediately.”

Sky Sports’ reporter Dharmesh Sheth has now provided an update on Fiorentina’s position, which may be at odds with Vlahovic himself.

Four players Man City can afford and could sign in January

“Dusan Vlahovic, the Fiorentina striker, is the name which just won’t go away,” he said on Sky Sports News on Monday.

“We know that Arsenal have an interest in Dusan Vlahovic. I’ve spoken to my colleagues at Sky in Italy this afternoon and the feeling they’re getting is that Fiorentina would be open to doing a deal in this January transfer window.

“But it’s the player and his representatives that perhaps want to take a step back and reassess all of his options come the summer.

“Why would Fiorentina be willing to do business for a prized asset like Dusan Vlahovic in the January transfer window?

“The big issue is that he’s got 18 months left on his contract and they realise that this would be the optimum time to get the maximum transfer fee in the remainder of his contract, if he wasn’t to sign [a new] one.

“And they’re starting to make noises, Fiorentina. The chief executive is saying in public ‘we want you to make a decision, as far as your new contract is concerned, because we want to start planning for the future’.”

However, Sheth believes that Arsenal’s current lack of Champions League football could damage their chances of signing him.

“Vlahovic wants to assess all his options and Champions League football may be a factor in those options,” he added.

“If he were to join Arsenal now and they don’t make the Champions League, then where does that leave him?”