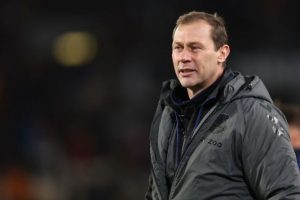 Everton’s sacking of former manager Rafael Benitez on Sunday has paved the way for a new manager to make a mark at Goodison Park, with caretaker manager Duncan Ferguson being linked with the job permanently. And the Scot has reportedly made his intentions to take the role permanently ‘clear’ to owner Farhad Moshiri.

Ferguson, 50, featured in 239 Premier League appearances for the Toffees, scoring 60 goals in the process.

Having become a cult hero at Goodison Park for his brazen and ruthless approach, it always felt inevitable he would end up in the coaching set-up on the blue half of Merseyside.

He did so voluntarily in 2011 under the leadership of David Moyes in the club’s academy, slowly working his way up to a first-team role by 2014.

And, after the departure of Marco Silva as manager in December 2019, the Scot was named caretaker manager.

He beat Chelsea 3-1 at Goodison Park in his first game as manager, before draws to Leicester, Manchester United and Arsenal rounded off an unbeaten tenure before Carlo Ancelotti was announced as the new permanent manager.

And his temporary successful stint two seasons ago will likely see him take control until the Toffees can find a new manager.

However, according to the Daily Mail, he has thrown his name into the hat over a permanent appointment.

The club reportedly sounded out Roberto Martinez as a potential interim choice, although the Belgian FA refused to cooperate with the 2022 World Cup on the horizon throwing a spanner in the works.

And this could see other targets pursued, including a potential permanent move for Ferguson if he impresses once again.

The Toffees currently sit a measly 16th in the Premier League table, despite being 5th at the start of October.

But six points in just 13 league games have seen the club slide perilously close to relegation under Benitez, who also oversaw the departure of Director of Football Marcel Brands.

And a shock 2-1 loss to Norwich, who recorded just their third win of the season against Everton on Saturday to leave the Toffees just five points clear of relegation, saw Benitez’s exit expedited.

The club have already spent £33million this winter on the arrivals of young full-backs Vitaliy Mykolenko and Nathan Patterson.

However, they did sell stalwart Lucas Digne for £25m, meaning there may still be money to spend for whoever becomes the new manager.

The Blues face Aston Villa on Saturday in a bid to find their way back to the top half of the Premier League table.