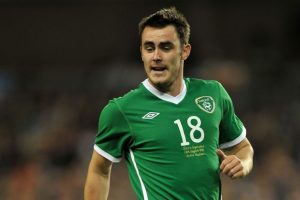 On the face of it, Keith Treacy had it all.

A footballer with experience of playing in the Premier League, caps for his country and a salary that most of us can only dream of.

But inside Treacy was battling personal demons, namely alcohol and depression. And as he approached an age where he should have been in his peak years, he instead walked away from the game.

He was just 26 when he quit from the professional game. He walked out on Barnsley and never played a game in England again.

In a revealing interview with Sky Sports, the ex-Blackburn and Burnley midfielder has spoken about how his love for the sport diminished despite his stock rising.

Treacy, now 32, said: "Did I ever enjoy it? Not really. I never came off the pitch thinking I had really enjoyed it.

"I was asked not so long ago what my ambitions were. When I was a kid it was to play in the Premier League and play for my country. I did not put a goal of 100 caps on it. I was not very ambitious with my thinking. By the time I was 21 I had done it.

"The fire really did start to go out in me at that point. I just was not hungry any more.

"I was doing well financially and the drink took hold. I had reached the top of the mountain and everything hit me all at once. I started to get a bit heavier around the waist."

Treacy made his top flight debut for Blackburn in 2008 and was handed his Republic of Ireland bow two years later.

He came on as a substitute during a friendly game against Argentina and despite impressing against the likes of Lionel Messi, Treacy admits to feeling very little emotion about the encounter.

After the game he popped into a local pub to meet his Grandfather and handed over his shirt without a second thought.

He said: "I remember everyone calling me and saying, 'You played against Messi and Di Maria.' I just wasn't interested. I just wanted to go.

"I walked out of the stadium, down to the pub, gave him the jersey because it was around his birthday, and we had a few pints. I could probably tell you more about the night in the pub than the match itself."

On his alcohol addiction, Treacy admits that most of the time he drank to forget: "I was not drinking because I liked the taste.

"I was drinking because I wanted to black out and forget, get up in the morning, get the football out of the way and do it all over again. Rock bottom was waking up in bed and all I could think about was going back to the pub. I think I was at the point where I could have lost my life with it. I was drinking to hurt myself."

Thankfully, Treacy is now in a much better place and is back in Ireland with his family. He has not ruled out returning to football but insists it would strictly be on a part-time basis.

For current players who are going through similar issues that he experienced, Treacy's advice is to reach out and ask for help.

He added: "I have no agenda, I don't want to be plastered over social media and I don't want money. If I can help someone cope with the demands of the game, anything like that, I want to do it. If I can make a young player feel a little bit better about himself then my job will be done.

"Anyone who thinks that I might be someone who could relate to them, please do get in touch because I am not here to judge or to tell your manager. Maybe you will go on and do brilliantly with me having played a small part. That would make me feel great."