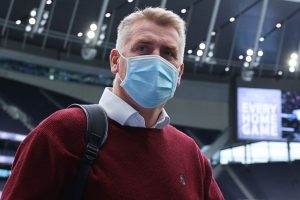 Aston Villa head coach Dean Smith will miss the team’s friendly with Walsall on Wednesday as he is isolating, the club announced.

Assistant head coach Craig Shakespeare will take charge as Villa play their first friendly ahead of the 2021/22 Premier League season.

Aston Villa can confirm that Head Coach Dean Smith will not be present at tonight's friendly with Walsall as he is currently isolating with his family.

Craig Shakespeare will take charge of the team this evening. pic.twitter.com/sFi2eQzxqb

Fifty-year-old Smith made 142 appearances for Walsall in his playing career, and also managed them from 2011-2015. He is entering his fourth season with Aston Villa after joining from Brentford in 2018.

After leading them to promotion in his first year in charge, Smith’s Villa ended 17th in the Premier League in 2019/20 before an impressive 11th-place finish last season.

They kick off their league campaign on August 14 with an away game at Watford.

Before then, they have friendlies lined up with Stoke City (July 24), Nottingham Forest (July 28), Bristol City (July 31) and Sevilla (August 7).