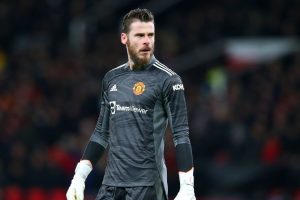 Under-fire David de Gea has been tipped to see his time at Manchester United “end quite quickly” after his howler in the Red Devils’ midweek win over Arsenal.

De Gea collided with United team-mate Fred and collapsed in a heap, leaving the goal open for Emile Smith Rowe to fire the Gunners ahead.

Though United protested fiercely, referee Martin Atkinson had little choice other than to award the goal having failed to spot the prone De Gea and stop play.

The Spaniard recovered quickly from his apparent injury, before an equaliser from Bruno Fernandes and Cristiano Ronaldo’s double spared his blushes to secure a much-needed win.

But former Manchester City star Trevor Sinclair believes that time could be up for the United keeper after his latest blunder.

“Sometimes when you go on the pitch, you've got to take a bit of pain – and that wasn't good enough,” he told talkSPORT.

“And he's cost his team a goal because the shot from Smith Rowe wasn't great. With Ralf [Rangnick] coming in, wanting to play a high line, I think he's going to have to be sweeper keeper.

“So, De Gea's time at Man United is probably going to end quite shortly. For me, that's a little acid test, how big's your heart? And he's let them down.”

Despite United’s protestations, Sinclair backed Atkinson’s decision to let the goal stand and blasted De Gea for going down.

“They got it right. We've all been smashed in the ankle, it's not going to get any worse,” Sinclair added.

“You can get back to your feet, wait for the ball to go out of play, then get the assistance you need medically.