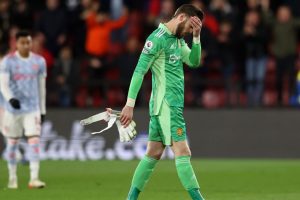 Manchester United goalkeeper David De Gea tore into his teammates after suffering an “embarrassing” 4-1 defeat away to Watford on Saturday as the side’s poor form continued.

United slumped to their worst top-flight loss to a newly-promoted side since 1989 in Saturday’s defeat as captain Harry Maguire was sent off late on in a result that appears to be Ole Gunnar Solskjaer’s last game as manager.

– Sources: Solskjaer looks to be done at Man Utd
– Stream ESPN FC Daily on ESPN+ (U.S. only)
– Don’t have ESPN? Get instant access

De Gea, who saved two penalties in the opening stages of the game, heaped responsibility for the side’s poor onto his teammates, who have now lost four of their last five Premier League games.

“There’s not much to say — it was embarrassing to see Man United play like we did today,” De Gea told Sky Sports in a postmatch interview.

“It’s not acceptable the way we were playing and doing things. It is easy to blame the manager or the staff, but sometimes it is the players. We need to show much more than we are doing.

“Embarrassing first half — we could’ve conceded four goals in 45 minutes. It was hard to watch the team playing today. It was nightmare after nightmare. It’s not acceptable.

“We are trying to give our best and fight for the team but for sure something is very wrong. You can see in the games — it’s very low level, very poor. Sorry to the fans, once again.

“This is not Manchester United or the way we ought to play. It is difficult to say more than that.

“It’s been very bad for a long time — a club like Man United we have to be fighting for trophies and fighting for big things and to be honest we are far from that. Let’s see – we have to keep working hard and stick together. We always say the same things but it’s the truth, we have to look at ourselves and see where we can improve.”

Goals from striker Joshua King and forward Ismaila Sarr meant Watford entered the half-time break with a well-earned lead. United midfielder Donny van de Beek came off the bench and gave his side a glimmer of hope when he nodded home into an empty net on 50 minutes.

“I always have belief in myself,” Solskjaer said in a postmatch news conference. “At the moment, it’s a difficult time for us. I believe we can turn this around.

“I understand fans who follow the club through thick and thin, they’ve been fantastic the last few years. It’s a difficult period. We’ve had a hard time since Sir Alex [Ferguson] left and fans who’ve been with us have been unbelievable.

“Being second [last season] we hoped to kick on and at the moment we can’t seem to find our form. I understand [fan frustration] that’s their right to show their opinion.

“I need to get the players to perform better, that’s my responsibility, that’s the biggest thing now.”

United are next in action when they face Villarreal in a crucial Champions League clash on Tuesday before taking on Premier League leaders Chelsea next Sunday.