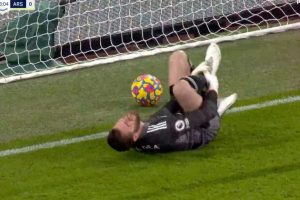 David De Gea has been branded a 'disgrace' and 'pathetic' by Manchester United fans after the Red Devils conceded a controversial opener against Arsenal.

In Michael Carrick's final game as stand-in manager, United were left screaming at referee Martin Atkinson who let play continue when it appeared De Gea was fouled in the area.

With the Spaniard lying on the deck, Emile Smith-Rowe volleyed the ball into the bottom left corner before Atiknson stopped play and awaited instruction from his V.A.R assistants at Stockley Park.

Though on closer inspection, camera replays revealed it was actually fellow Man Utd player Fred who had trodden on the feet of the De Gea and so Atkinson signalled towards the centre-circle, awarding the goal.

One fan tweeted: "I'm done with De Gea. He’s an embarrassment. Especially after watching the Bryan Robson doc today. No way would he have that from De Gea. An absolute disgrace."

Another stated: "That was pathetic stuff from De Gea. Nothing wrong with him but tried to be smart getting a free kick. Absolutely has cost us big here early on."

Should Arsenal's opening goal against Manchester United have stood? Let us know in the comments section.

"Why is De Gea going to ground there like that," tweeted one supporter.

"Surely you stay on your feet til the danger passes at the very least? That decision should stop the play acting – a note to everyone: Stay on your feet!"

While one Man Utd fan said: "So soft by De Gea, don't care if ur leg is hanging off u don't do that. Shocking."