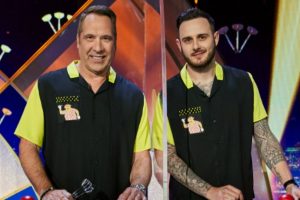 Alan Carr has got a “smashing” contestant for a celebrity version of Bullseye – footie legend David Seaman.

The darts-themed telly classic is back on the box next weekend as part of ITV’s Epic Gameshow.

During filming, former England goalkeeper David, 57, admitted the pressure was getting to him.

He said: “How nerve-racking is this? I’ve played in bloody World Cups.”

And asked how it compared to facing penalties, he lamented: “This is worse.”

David wanted to do well as he is a keen darts player.

He said: “I played in the pub team, it was one of the most nervous times I’d ever felt. “All the lights went out. It went quiet and then you had to throw darts.”

Bullseye was a big hit in the 1980s when it was fronted by Jim Bowen, famous for his “super, smashing, great” catchphrase.

The show airs next Saturday at 7:30pm.