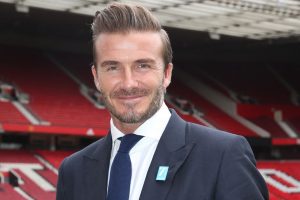 David Beckham is reportedly open to talks with potential bidders for Manchester United.

The Red Devils have been put up for sale by their unpopular owners, the American Glazer family, and the Financial Times claim prospective buyers could seek the help of club legend Beckham.

Getting the former England captain on board would give any bid a massive boost thanks to his ties with the club. Beckham has remained close with his former side since leaving to join Real Madrid in 2003.

He spent most of his legendary career at Old Trafford, winning six Premier League titles, two FA Cups and the Champions League under Sir Alex Ferguson.

While he can't afford the Glazers' £6billion price tag on his own, with his net worth reported to be £370million, he could be invaluable to an investment consortium.

It's claimed various parties have approached him in the past to gauge his interest, but those talks never progressed.

Beckham is co-owner of MLS side Inter Miami, while he's faced significant backlash for his current ambassador role for the Qatar World Cup.

The first bidder for the club is set to be Britain's richest man Sir Jim Ratcliffe. A lifelong United fan, Ratcliffe has previously declared his interest and spoke with the Glazers earlier this year.

The report states other possible buyers include business pair Josh Harris and David Blitzer, and a group led by basketball moguls Stephen Pagliuca and Larry Tanenbaum.

A United club statement shared earlier this week said "all strategic alternatives" would be considered, so there may not be an outright sale. However, it seems the Glazers have caved to fan pressure after repeated protests throughout their 17-year tenure.

Tech giants Facebook and Amazon have also been named in connection with United. And the sovereign state of Dubai could follow other Middle Eastern countries who have invested in football clubs.

This is a breaking sports story and is being constantly updated with the latest news, pictures and videos. Please refresh the page regularly.

You can also get email updates on the day’s biggest sports stories straight to your inbox by signing up for our sports newsletter .

Get all the very best sports news, pictures, opinion and video by following Daily Star every time you see our name.

Keep up-to-date with your must-see sports stories, features, videos and pictures throughout the day by following us on Facebook at https://www.facebook.com/DailyStarFootball