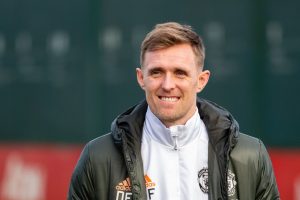 Manchester United's new technical director Darren Fletcher has been credited with an unlikely assist off the pitch after helping to seal the signature of Rafael Varane.

The 28-year-old defender is expected to be confirmed at Old Trafford imminently in an initial £34m deal from Real Madrid.

Fletcher made 223 Premier League appearances for United over a 20-year spell with the club but has only been in his new boardroom role since March.

Despite that, the Scotsman has already helped to make a significant impact during his talks with Varane. According to ESPN, Fletcher and new United director of football John Murtough were both tasked with getting the deal for Varane over the line.

It's reported that Fletcher 'particularly swayed' the commanding centre-half in agreeing on the switch to Manchester.

Losing Varane is a blow for Madrid, who chose to cash in rather than lose him for free next summer.

Will Varane transform Man Utd into title contenders? Comment below

The Frenchman has made over 200 appearances for the Spanish giants during his decade-long stay at the Bernabeu.

United boss Solskjaer has already shared his delight at getting the deal agreed as he continues his bid to bring the Premier League title back to Old Trafford.

“Of course, I’m very happy that we’ve managed to get the deal with Real Madrid,” Solskjaer told MUTV.

“He’s a proven winner and a player we’ve followed for many, many years.

"I know Sir Alex was very, very close to signing him and this time around we’ve got him at the other end of his career.

“He’s proved over his whole career what a good person he is, first of all. [He’s a] professional and he’s won all there is to win.”

Solskjaer has even hinted at further new arrivals, stating he is hopeful the club will get a little bit more business done before the window shuts at the end of this month.