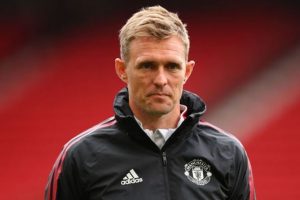 Manchester United are set to appoint Darren Fletcher as their temporary manager after deciding to sack Ole Gunnar Solskjaer. The Red Devils suffered a humiliating 4-1 defeat at Watford on Saturday and have fallen a staggering 12 point behind Premier League leaders Chelsea.

United chiefs held an emergency meeting on Saturday night and have decided to take a financial hit and wield the axe to finally put Solskjaer out of his misery.

Solskjaer’s team have been dismal in recent weeks and the Norwegian boss appears to have lost the dressing room.

According to the Manchester Evening News, Fletcher could be in charge by the time the team travel to Villarreal for their penultimate Champions League game on Tuesday night.

Fletcher currently works as the Red Devils’ technical director and will be assisted by Solskjaer’s current right-hand man Michael Carrick.

Saturday’s performance was nothing short of a complete embarrassment as Man Utd were dominated by a side struggling at the wrong end of the table.

Watford thought they had taken the lead after 11 minutes as Kiko Femenia thrashed home the rebound after David de Gea had saved Ismaila Sarr’s penalty.

But the referee ordered a retake and De Gea once again kept the spot kick out.

The hosts eventually did go ahead just before the half-hour mark as Joshua King turned home Emmanuel Dennis’s pull back.

And Sarr finally got his name on the scoresheet as he thrashed the ball past De Gea just before the interval.

Donny van de Beek, who had come on at half time, halved United’s deficit soon after the break and the visitors then pushed for an equaliser.

But they were dealt a huge blow as Harry Maguire was sent off after two quickfire bookings.

And Watford saw the game off in stoppage time at the end of the match as Joao Pedro and Dennis added late strikes.

The defeat means United have now won just once in their last seven Premier League games and have taken only four points from the last available 21.

And club chiefs are in agreement that Solskjaer can’t carry on, with United’s season in danger of becoming farcical.

Man Utd will reportedly have to pay Solskjaer an enormous £7.5million to get rid of him after handing him a new three-year contract in the summer.

And they are apparently lining-up a move for former Real Madrid boss Zinedine Zidane to take the helm on a permanent basis.

“I am very hurt – when you play in the Premier League you have got to turn up against good players and good opposition like this,” Solskjaer admitted after Saturday’s thumping defeat.

“The boys are in a terrible place in their heads now – we have let ourselves down and the fans down.”