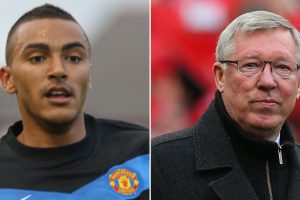 Former Manchester United full-back Danny Simpson was once left in tears by a Sir Alex Ferguson ‘hairdryer treatment’ after he was subbed at half-time, he has revealed.

Coming through the youth ranks at United, Danny was sent out on loan to Belgian side Royal Antwerp and Sunderland before finally making his first start for the club in the 2007/08 season.

However, the right back’s career with the Red Devils didn’t begin as well as he’d have hoped.

After his competitive debut ended in a 2-0 League Cup loss against Championship side Coventry City, the defender confessed that one of his first Premier League starts for United had also not gone to plan.

Interviewed on the 'On the Judy' podcast, Danny admitted that like most Manchester United players who played under Ferguson, he wasn’t immune from his infamous ‘hairdryer treatment’ rants.

“It was one of my first games against Everton, and it was about an hour and half before kick-off. He was like, ‘Danny, you’re playing’, and I was like, ‘s**t, I’m not ready for this’," he began.

The defender explained that because he usually didn’t even make the substitutes bench on a matchday, he had been “up all night” messing around with other young players like Gerard Pique.

At the time, Everton had developed a reputation for scoring goals from crosses, with balls from the left swung in by Steven Piennar to be converted by powerful Australian Tim Cahill.

So, as a right back, Danny had a tough job on his hands. He described his manager’s instructions, remembering: “Sir Alex says one thing: ‘stop crosses’… then 20 minutes in, they’ve crossed it, Cahill header, [and we’re] 1-0 down.

“And the next 20 minutes my head was gone, I was awful. I can’t even look at the performance back.”

Danny recalled that, entering the dressing room at half-time, Ferguson was immediately in his face, taking him off for the second half.

“So I’m sat in the dressing room, the whole second half, and I’m in tears… The lads came over when he finished his speech, and y’know the little pat on the head? as if to say, ‘we’ve all been there’, and that’s what got to me even more,” he continued.

Thankfully for United, they were able to win the game after two Cristiano Ronaldo goals.

And, reflecting on the game now as an experienced veteran, Danny said he could understand why Ferguson had laid into him.

“Looking back, imagine Man United lose at home to Everton. I didn’t realise at the time, that’s a big three points,” he explained.

“And that’s on his shoulders if they lose and put a kid in, and he’s trusted me. Now that you get older you realise that if you’d lost those three points that could have had a big detrimental effect on them winning a league title.”

As it turned out, the victory was crucial, as Manchester United won the league title by a margin of only two points, beating Chelsea to the trophy.

Later that summer, Simpson temporarily left the club when he signed for Blackburn Rovers on a season-long loan deal, though this was terminated prematurely in May 2009.

To get more sport stories from Daily Star delivered straight to your inbox sign up to one of our free newsletters here.