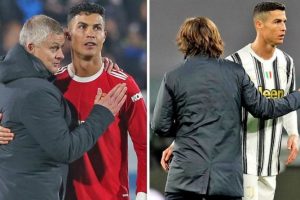 Cristiano Ronaldo trains with Man Utd ahead of Villareal test

Cristiano Ronaldo only returned to Manchester United back in the summer but, now, is set to play under yet another new manager. Ralf Rangnick is on the verge of taking over at Old Trafford, with the 63-year-old poised to sign a six-month deal. So Express Sport will now take a look at how Ronaldo has fared under his previous 11 managers.

Long before he played for United, Real Madrid or Juventus, Ronaldo was a talented teenager at Sporting Lisbon.

He made 31 appearances under Laszlo Boloni during his time in Portugal, with 17 coming as a substitute.

Ronaldo scored five goals throughout that spell, as well as registering six assists.

Those numbers would have likely soared if he would stay but, after wowing Sir Alex Ferguson and United players, he then moved to Old Trafford as David Beckham’s replacement in 2003.

Ferguson always thought Ronaldo was destined to reach the top.

And he was unplayable in his final three years at United, helping the club win three Premier League titles and reach two Champions League finals – triumphing against Chelsea in 2008 before losing to Barcelona the previous year.

The Scot never wanted to let the 36-year-old go but, with Ronaldo enchanted by the idea of playing for Real Madrid, was unable to keep him at the club.

Real named Manuel Pellegrini as their manager in 2009, with the Chilean replacing Bernd Schuster.

In his first season in Spain, the veteran bagged 33 goals from 35 games.

He also registered 12 assists and wore the No 9 shirt, with No 7 occupied by Raul at the time.

Things weren’t always plain-sailing under the combative Portuguese, who clashed with Iker Casillas and Sergio Ramos in particular during his turbulent spell in the dugout.

But Mourinho helped shape Ronaldo into an even better goalscorer than he was before.

The forward scored 156 times from 164 appearances under Mourinho, helping them end Barcelona’s dominance of La Liga in the process.

After the chaos of Mourinho came the calm of Carlo Ancelotti.

And though the Italian lasted just two years during his first stint in Spain, he did help Los Blancos end their agonising wait for Champions League glory in 2014.

Ronaldo was on target against Atletico Madrid in the final and bagged 112 goals from 101 matches.

He also clocked up a stunning 47 assists, while netting 23 times from the penalty spot.

Real put Rafa Benitez in charge following the departure of Carlo Ancelotti in 2015.

But the Spaniard didn’t last at the Bernabeu.

That wasn’t enough to save Benitez from the sack, however, with the current Everton boss then being replaced by Zinedine Zidane.

Under Zidane, Ronaldo reached his peak.

The 36-year-old was simply unplayable throughout the Frenchman’s time at the club, scoring 112 goals from 114 matches and clocking up 30 assists.

Ronaldo helped Real win the Champions League three years in a row between 2016 and 2018.

But both men decided to quit the club in the aftermath of their triumph over Liverpool, with Ronaldo joining Juventus.

Ronaldo had three different managers in his three years in Turin.

Massimiliano Allegri was the first, with the duo helping Juventus win the Serie A title in 2019.

Ronaldo scored 28 goals from 44 matches during his first spell in Italy, with six of them penalties.

He averaged a goal every 131 minutes and Allegri left to take a break, leading to the appointment of Maurizio Sarri.

Sarri and Ronaldo didn’t always get along at Juventus.

But they were still successful together, helping the Old Lady retain their Scudetto during their sole season with each other.

Ronaldo scored 37 goals from 46 matches under Sarri, with 14 of them coming from the penalty spot.

Yet Juventus decided to change things again and replaced Sarri with Andrea Pirlo.

Andrea Pirlo the player was a magician.

With regards to the manager, however, the jury is still out.

Pirlo saw Ronaldo net 36 times from 44 matches, starting him in 41 of those games.

But Juventus could only finish fourth in Serie A last term and Ronaldo, sensing the team were in decline, then decided to leave to rejoin United back in the summer.

But Ronaldo didn’t let the Norwegian down, even if some of his team-mates did.

The veteran had nine goals to his name from 14 outings prior to the Norwegian’s dismissal.

He scored his tenth goal of the campaign in midweek, against Villarreal, with Michael Carrick in charge for that fixture.