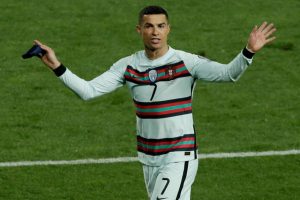 Ronaldo stormed off the pitch after being denied a goal against Serbia in Saturday’s World Cup qualifying clash despite the ball appearing to cross the line.

The Juventus ace ripped off his armband in frustration though it will now go towards a good cause.

Humanitarian organisation Together for Life are now selling Ronaldo’s Portugal armband to the highest bidder over the next three days.

The earnings will go towards the sick Serbian youngster as Together for Life look to raise over £2m for treatment.

Ronaldo’s armband had been taken from the Belgrade stadium by a worker, who donated it to Together for Life and baby Gavril.

Ronaldo was unapologetic following his rant, writing on social media: “Being captain of the Portugal team is one of the greatest privileges of my life.

“I always give and will give everything for my country, that will never change.

“But there are difficult times to deal with, especially when we feel that an entire nation is being harmed.

“Lift your head and face the next challenge now! Strength, Portugal.”

Portugal boss Fernando Santos added of the decision: "We scored a goal that was not given when the ball went in. In a match of this level, that isn't possible.

"He had told me on the pitch that he was going to see the images and that if it was the case he was calling me to apologise – and so it was.”

READ MORE: Gary Lineker has hilarious showdown with elderly woman after she found his phone in park