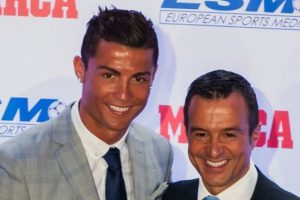 Cristiano Ronaldo’s agent Jorge Mendes will meet with Manchester City on Thursday to propose the opportunity to buy the superstar, according to reports. Ronaldo’s Juventus future is uncertain amid links with various clubs this summer, including a shock swoop to the Etihad Stadium.

Ronaldo has most frequently been linked with a return to Real Madrid or blockbuster move to Paris Saint-Germain, joining fellow Ballon d’Or-hauler Lionel Messi.

But Real manager Carlo Ancelotti first trumped the rumours, before Ronaldo confirmed a return to the Spanish capital was off the cards.

Amid Kylian Mbappe’s desire to leave, the Portugal hero has been tipped to be his replacement this summer or on a free transfer next.

An interesting contender among the media, though, is Man City, currently looking for a star striker before the August 31 transfer deadline.

A few days ago, Corriere dello Sport, via Sport Witness, reported that Mendes offered Ronaldo to the Premier League champions.

On Thursday, the same publication claimed the 36-year-old’s agent would meet with City again and won’t give up on the prospect of Ronaldo joining.

Mendes also sees the possibility of taking Joao Cancelo from the Etihad to Bayern Munich if he can ‘whet Mansour’s imagination’.

Considering Ronaldo’s past as a Manchester United hero, a switch to the blue side of the city would carry controversy.

He spent six years at Old Trafford and won the first of his five Champions League trophies under Sir Alex Ferguson.

Man City are still pursuing their first as a club, and Pep Guardiola has been vying to sign a striker to help them secure it.

The Citizens are ready to offer Tottenham Hotspur £150million for Harry Kane, which could be enough to see him join.

After Sergio Aguero’s summer departure, Guardiola only has one natural striker in the first team, Gabriel Jesus.

The Catalan boss has previously opted to use wingers or midfielders as a false nine and started Ferran Torres there in the 1-0 defeat at Tottenham on Sunday.

Despite the latest reports, Ronaldo arriving the fill the void is unlikely, but Kane could yet arrive.

With Kevin De Bruyne returning from injury, he could play as Guardiola’s false nine with Ilkay Gundogan and Jack Grealish in the two advanced midfield spots.