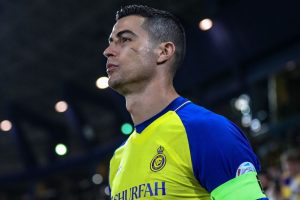 Cristiano Ronaldo has been sent a clear message of support from the Al-Nassr hero he brutally took the captaincy from last month. The iconic forward made his debut for the Saudi Arabian outfit in their 1-0 victory over Ettifaq on Sunday but failed to find the net.

The man Ronaldo replaced as skipper is long-serving club icon Abdullah Madu. The Saudi Arabia international has been with the club for over a decade and has lifted the Saudi Pro League title on three occasions.

However, there appear to be no hard feelings between Ronaldo and his predecessor. Both players lined up together in the win over Ettifaq and Madu was one of the team-mates who commented on Ronaldo’s Instagram post following the victory.

JUST IN: Man Utd’s Weghorst dreamt of Liverpool move and clashed with team-mate

“First game, first win – well done guys. Thanks to all the fans for incredible support,” Ronaldo wrote. Madu responded with yellow and blue heart emojis, the colour of Al-Nassr’s shirt.

Ronaldo has never permanently captained a team at club level. He would sometimes stand in as the man to wear the armband during his spells with United and Real Madrid, but never on a full-time basis.

That is despite him leading out Portugal for a remarkable 15 years, having been handed the captaincy of his country just prior to Euro 2008.

Some reports claimed that Ronaldo had urged Ole Gunnar Solskjaer to drop Harry Maguire as captain and hand him the responsibility during the opening months of his second spell at Old Trafford. Although all parties played down speculation of a rift between the players, Maguire remains club captain to this day.

Despite not scoring on his Al-Nassr debut, head coach Garcia was pleased with Ronaldo’s efforts. Ronaldo’s strike partner, the former Benfica star Anderson Talisca, scored the only goal of the game, leaving his side top of the Pro League.

“It’s a positive addition when you have a player like Ronaldo as he helps to distract the defenders, which is what happened with our goal,” Garcia said.

“Today we created opportunities for him and asked the players to diversify the game between him and Talisca, and we must not forget that he participated in the (exhibition match against) Paris St Germain and did not get enough rest.

“Even with the presence of Ronaldo, it is not easy to win the Saudi League because of the strength of the competitors.”