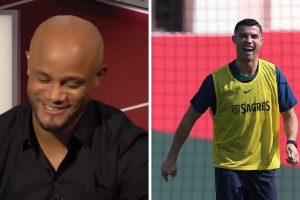 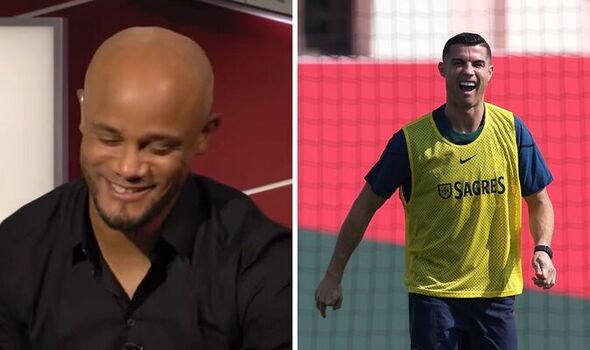 Burnley boss Vincent Kompany has ruthlessly mocked Cristiano Ronaldo by claiming he only wants to sign players “that run” as the Portugal legend prepares to find a new club following his departure from Manchester United. The 37-year-old has now left Old Trafford following the mutual termination of his contract with Newcastle and Saudi Arabian side Al-Nassr among the clubs linked with the five-time Ballon d’Or winner.

Former Manchester City defender Kompany is working for the BBC as a pundit during the World Cup and he was jokingly asked by Gary Lineker whether he would be interested in a shock swoop for Ronaldo.

His response was ruthless as he declared: “We need players that can run…”

The brutal comment was met with laughter from Lineker, Alan Shearer and Didier Drogba inside the BBC studio at half-time of France’s clash with Australia.

Rio Ferdinand, who is also working for the BBC, had also delivered his reaction to United’s mutual termination of Ronaldo’s contract during coverage of Poland’s 0-0 draw with Mexico.

“I think both parties will be delighted now,” he said. “He obviously did that interview with the mindset that he wanted to get out of the football club.

“[He] wasn’t happy, made it very clear, but I also think Erik ten Hag has got what he wanted as well in this situation. Both parties are happy, move on, next chapter for Cristiano Ronaldo.”

When asked where Ronaldo could go next, Ferdinand added: “I don’t know. We were talking about it here, I think it depends what the motivation is. Is it Champions League, money? Is it just to continue playing somewhere with a nice climate?

“This will be going on behind the scenes but we’ll find out I’m sure in due course.”