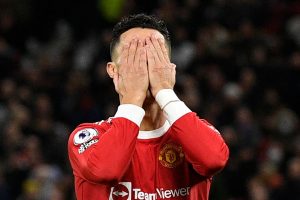 Cristiano Ronaldo has been left out of the Manchester United to take on Aston Villa in the Premier League on Saturday having taken part in a scathing interview in midweek.

Ralf Rangnick has in fact only named eight substitutes for the fixture, including two goalkeepers in Tom Heaton and Dean Henderson.

United progressed past Aston Villa in the FA Cup on Monday with a 1-0 win at Old Trafford, and will be hoping for a similar result at Villa Park.

Anthony Elanga, Edinson Cavani and Mason Greenwood were all handed starts for the fixture – with Ronaldo excluded having failed to recover from injury.

Rangnick confirmed before kick-off that Ronaldo had failed to recover from a hip flexor injury and didn't train on Friday.

"Hopefully he can play on Wednesday," Rangnick added.

That came after Ronaldo slammed the current form of the club during the week, having been expected to recover before the weekend.

Will Ronaldo win another trophy with United? Tell us in the comments section

"Manchester United belongs in important things, so we have to change.

:I do not want to be here in a club to fight for sixth place or seventh place or fifth.

"In my heart, I don't accept that our mentality can be less than to be in the top three in the Premier League in my opinion.

"I'm here to try to win, to compete. I think we compete, but we are not yet in our best level. We have a long way to go to improve."