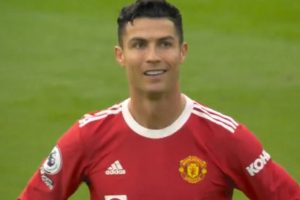 The Portuguese icon couldn’t help but let out a chuckle in disbelief as the Red Devils conceded their third goal of the game at the Amex Stadium. Pascal Gross’ 57th minute strike came when the home side carved up Man United’s defence with little trouble.

And Ronaldo was left stunned at his team-mates’ comical display, having conceded two goals already to Moises Caicedo and Marc Cucurella. The forward’s shock was shared by the travelling Red Devils faithful, who chanted “You’re not fit to wear the shirt” immediately after the goal.

Fans on social media spotted Ronaldo’s reaction and quickly took to Twitter to sympathise with the five-time Ballon d’Or winner.

One Twitter user wrote: “Ronaldo looks absolutely embarrassed to be on the pitch and he's just shaking his head and laughing to himself. who can blame him…”

Another fan tweeted: “Cristiano Ronaldo laughing/looking around smiling in disbelief really summarises this season doesn’t it. Gone from anger to shock to disappointment to concern and now it’s beyond anything and just a joke.”

Do you think Cristiano Ronaldo will leave Man United at the end of the season? Let us know in the comments section. Man United went on to concede another goal just three minutes after to add to the nightmare. There was more calamitous defending on show as a simple through-ball penetrated United’s defence, before Diogo Dalot’s goal-line clearance ricocheted in off Leandro Trossard.

The gruelling defeat put Ralf Rangnick’s side at risk of not qualifying for the Europa League next season. United remain stuck on 58 points with just one game left to play this season, while West Ham are six points behind with two games in hand.