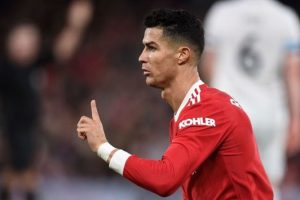 Cristiano Ronaldo’s second spell at Manchester United has not been as fruitful as he may have hoped, with United lying just seventh in the table. And with eight goals in 16 Premier League games for the talisman, there is reason to be concerned for the Portugal star. Express Sport takes a look at four similar cases.

Fowler was a huge hit in his first spell at Liverpool.

The Toxteth-born talisman burst onto the scene at 18 years old, winning the PFA Young Player of the Year in 1995 and 1996.

However, his return to Liverpool in 2005 led to just eight goals in 30 games as a 30-year-old – leading to his exit to Championship outfit Cardiff City.

Cole made his name in the West Ham academy, joining at the age of just eight where he was dubbed a child prodigy.

He made 150 appearances for the Hammers before moving to Chelsea in 2003 and became one of the Premier League’s most exciting players as Jose Mourinho’s men won two league titles in a row.

However, fitness issues plagued the winger, eventually leaving for Liverpool in 2010.

And upon his return to West Ham in 2012, he made just 37 appearances in two seasons before being released to Aston Villa.

Drogba can stake a real claim that he is arguably Chelsea’s greatest ever player.

Single-handedly winning the Blues a Champions League final in 2012, scoring 100 Premier League goals in 226 games and winning four top-flight titles – the Ivorian had it all.

Yet his second spell at the Blues, which came two years after leaving for Shanghai Shenhua, is best off being forgotten about.

Just seven goals in 40 games for the former Marseille striker saw him move to Montreal Impact at the end of the season in a disappointing farewell.

Costa suffered a similar fate to Drogba at Atletico Madrid.

The Spaniard became one of the best strikers in the world under Diego Simeone, scoring 64 goals in 135 games.

His goalscoring prowess eventually awarded him a move to Chelsea where he won two Premier League titles.

However, he moved back to the Spanish capital just four years later.

And a failed move saw him score just 12 league goals in 61 games upon his return before being shipped off to Atletico Mineiro.