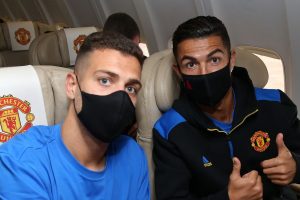 Manchester United boss Ole Gunnar Solskjaer has named Cristiano Ronaldo in the 22-man squad that will travel to Switzerland to take on Young Boys in their Champions League opener.

The Norwegian stated after the Portugal skipper scored twice against Newcastle on his second debut for the club that it is "not impossible" to leave him out of fixtures this season.

That has led to speculation that the former Juventus forward would not be called upon in their opening European tie of the campaign – but the club have now confirmed that he will indeed travel.

While Ronaldo will be desperate to score his first Champions League goal for the Red Devils since he left for Real Madrid in 2009, he might have to do so from the bench on Tuesday.

"Saturday's two-goal hero Cristiano Ronaldo is in the group for his first Champions League trip with the Reds since playing in the 2009 final – his last match for United during his first spell with the club."

While Solskjaer won't be able to call upon the injured Edinson Cavani following a minor injury he suffered in the 4-1 win over Newcastle, Anthony Elanga is included in the party.

Solskjaer said at the weekend: "Edinson got a knock in training. Maybe he’ll be [out for] a week or so, he’s still working his way up to full fitness from that one."

Will Cristiano Ronaldo fire Manchester United to Champions League glory this season? Give us your thoughts in the comments section

Having said of Ronaldo's fitness levels: "It’s not impossible to leave him out. He is 36, Mason [Greenwood] is 19, so it’s the same.

“Of course there is a game on Tuesday. We will see what we do.”