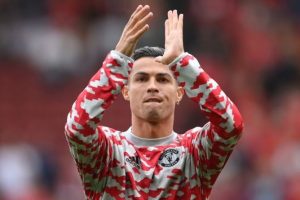 Cristiano Ronaldo got his second spell at Manchester United off to a near-perfect start with an impressive brace on his long-awaited return against Newcastle United on Saturday afternoon. The mercurial 36-year-old, who signed a two-year contract with the Red Devils on deadline day, inspired his side to a comfortable win over the Magpies to mark the occasion in style.

He opened his account shortly before half-time, tapping home the rebound after Mason Greenwood’s fiercely-struck effort was parried into his path by Newcastle stopper Freddie Woodman.

Javier Manquillo equalised for the visitors after the interval before Ronaldo restored United’s lead with an exquisite two-touch finish in front of the adoring Stretford End.

Bruno Fernandes and Jesse Lingard also got in on the act before the full-time whistle to help the Red Devils cap off a resounding 4-1 win over Newcastle and climb to the summit of the Premier League table.

Most of the plaudits will be lapped up by Ronaldo, who wasted no time at all in picking up where he left off at United after a 12-year absence.

The former recently warned that Ronaldo could struggle to get along with his younger United team-mates, suggesting that his imposing presence could damage the morale of certain players behind closed doors.

“There is enthusiasm, but it remains to be seen if Ronaldo will be a cumbersome presence as Zlatan [Ibrahimovic] was,” Di Canio told La Gazzetta Dello Sport.

“Sometimes young players without much personality didn’t understand he wanted the best from them.”

Di Canio’s claims were somewhat premature based on Saturday’s evidence, with Ronaldo commanding the respect of every United player on the pitch.

He followed through with a trademark match-winning performance to justify the fanfare around his return to the club, and it remains to be seen whether he can help United’s young stars to blossom over the coming weeks and months.

Merson was another pre-match critic, with the 53-year-old previously claiming that Ronaldo would need to rely heavily on crosses to make the most of his ability at Old Trafford.

“He will score you goals if you put the ball in the box,” said Merson on Sky Sports.

“My problem is Rashford, Greenwood or Sanchez [Sancho] are not all playing when they’re fit. Now, they are three very talented footballers.

“They’re the future of Man United. I know they’re going to learn off this man, but at the same time Ronaldo needs crosses in my opinion.”

Neither of Ronaldo’s two goals against Newcastle came from aerial balls, with his first being put on a plate for him after Greenwood’s long-range attempt was parried into his feet.

His second was created by Luke Shaw, who carried the ball into the Magpies half with a marauding run before playing an inch-perfect through ball for Ronaldo to slot home.

United have only completed 91 crosses in the Premier League this season, the ninth-highest number in the division.

It seems unlikely that Solskjaer will change his style to rely on his wide players when Ronaldo and Fernandes, the club’s most influential assets, played centrally for the visit of Newcastle and are expected to do so for the rest of the season.

It remains to be seen whether Ronaldo will be able to maintain his prolific form on Tuesday when United entertain Young Boys in their Champions League group stage opener.

The Red Devils will return to Premier League action with a trip to London to face West Ham in seven days’ time.